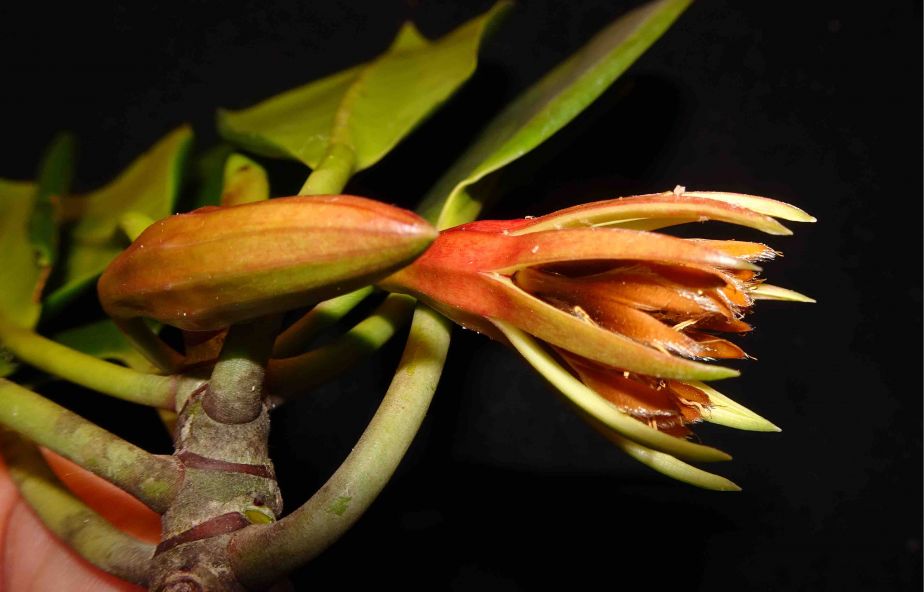 A citizen scientist has helped discover a completely new species of mangrove tree – another achievement to match his earlier discoveries of two other species far south of where their ranges were thought to end.

Dr Norm Duke, an international mangrove scientist with TropWATER at James Cook University, prepared the formal description of the new species for the journal Blumea, where new species of plants are officially recognised.

Dr Duke said the credit for this discovery again rests largely with Mr Kudo, whose dedicated and detailed observations of the tree justified further scrutiny, since the plant was not listed in Dr Duke’s expert species guide, ‘Australia’s Mangroves’, nor on the Australian Mangrove ID app. The app has now also been updated with the new observations.

In 2016, Mr Kudo found a Haines Orange Mangrove (Bruguiera hainesii) at Trinity Inlet on the outskirts of the Cairns CBD. The species was largely unknown in the southern hemisphere, and had never been recorded in Australia.

The second species he found, Bruguiera cylindrica, was previously only thought to grow north of Cooktown on Cape York Peninsula.

He told media at the time that he looked for mangroves for fun while walking his dog and made it a game to identify as many mangrove species as possible.

Dr Duke said the discoveries highlighted the lack of basic knowledge about even such sizeable plants.

“There clearly remain unknown species out there. These findings confirm embarrassing gaps in our botanical knowledge. These new findings have been made in busy populated areas, who knows what we might find in more remote places!”

Dr Duke praised Mr Kudo’s diligence and observational skills and said the find was another excellent example of the power of citizen scientists to advance the fields in which they are interested.

“This species is new to Australia and new to the world. It is significant because there are only 80 mangrove tree and shrub species known worldwide. I see this discovery and its publication as another triumph for partnerships between citizen science and science research,” he said.

Images here. (All images are of the Dungarra Orange Mangrove and Mr Kudo).

The app ‘Mangrove Click! Australia’ can be accessed here.