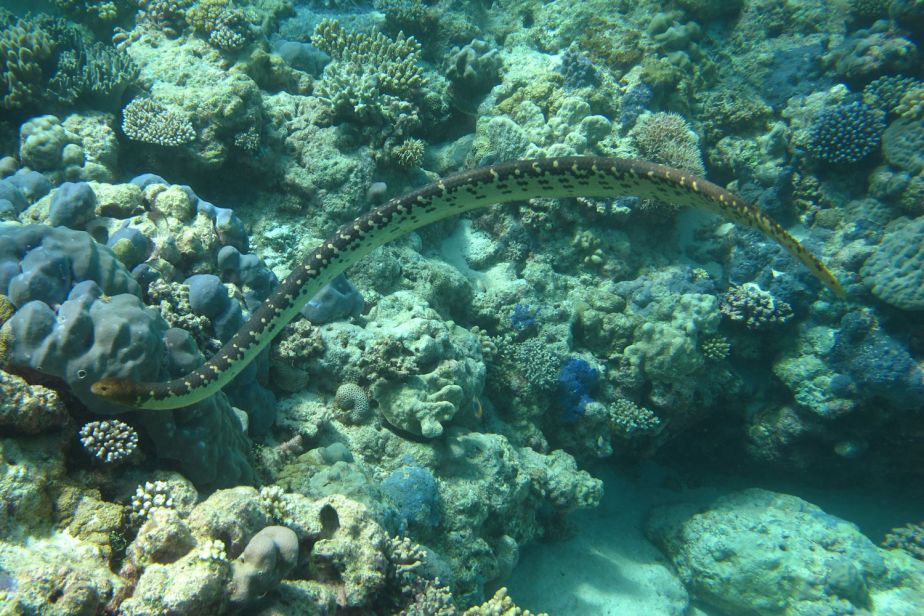 A new study of a remote region in Western Australia has shown it to be alive with sea snakes – including unique and endangered species.

She said the 2600 km2 estuary supports 790 species of fish, 63 species of sharks and rays, 173 species of crustaceans, 831 species of gastropods, bivalves and cephalopods, and 95 species of birds.

“Exmouth Gulf has at least 15 species of sea snakes, including some very unique species. One of these is the critically endangered short-nosed sea snake, thought extinct until collaborations between JCU and the WA Government revealed that there were breeding populations on Ningaloo Reef and in Exmouth Gulf,” she said

Ms D’Anastasi said the area was also home to the north-western mangrove sea snake, which has the unusual habit of coming out of the sea to forage in mangroves.

“The cherry on the top is we found the area contains seven species, such as Dubois’ sea snake, that might be new species unique to Western Australia, because they are very genetically distinct to their counterparts on the Great Barrier Reef. Further research is needed to see just how distinct they are,” she said.

Ms D’Anastasi said sea snakes are declining rapidly around the world due to overfishing, pollution and climate change.

“This means that recognising and protecting sea snake biodiversity hotspots like Exmouth Gulf is increasingly important,” she said.

Lead author of the report Dr Ben Fitzpatrick from the University of Western Australia said the Exmouth Gulf environment is even richer and more significant than the scientists anticipated.

“It’s also one the world’s most significant whale nurseries and plays an essential part in one of the greatest conservation successes – the recovery of humpback whale populations,” said Dr Fitzpatrick.

He said the area is so remote it gives whales a distinct advantage.

“Exmouth is still a wilderness area that has not been industrialised. It’s a quiet place where the whales need only whisper to their calves, enabling them to feed, rest, elude detection by predators and raise them successfully. Keeping Exmouth Gulf quiet will be the key to the ongoing success of our Humpback whales and the sustainable ecotourism industries worth millions of dollars annually to local communities.”

The report notes Exmouth Gulf is vulnerable to climate change and other human impacts, including industrial development, raising questions about the lack of research and protection in the region.

“The Gulf is a very significant ecosystem – the more we look, the more we realise how little we know. It merits a lot more study. It’s concerning that it still lacks any conservation status, especially given the multi-million dollar fishing and ecotourism industries that rely upon it,” said Dr Fitzpatrick.

Scientists are calling on state and federal Governments, conservationists and industry to work together to better understand the extraordinary ecosystem and protect the Exmouth Gulf Wilderness.

A collaboration of Oceanwise Australia, James Cook University, UWA’s Oceans Institute,   Curtin University and Sharks and Rays Australia, the research is endorsed by the International Union for the Conservation of Nature (IUCN).