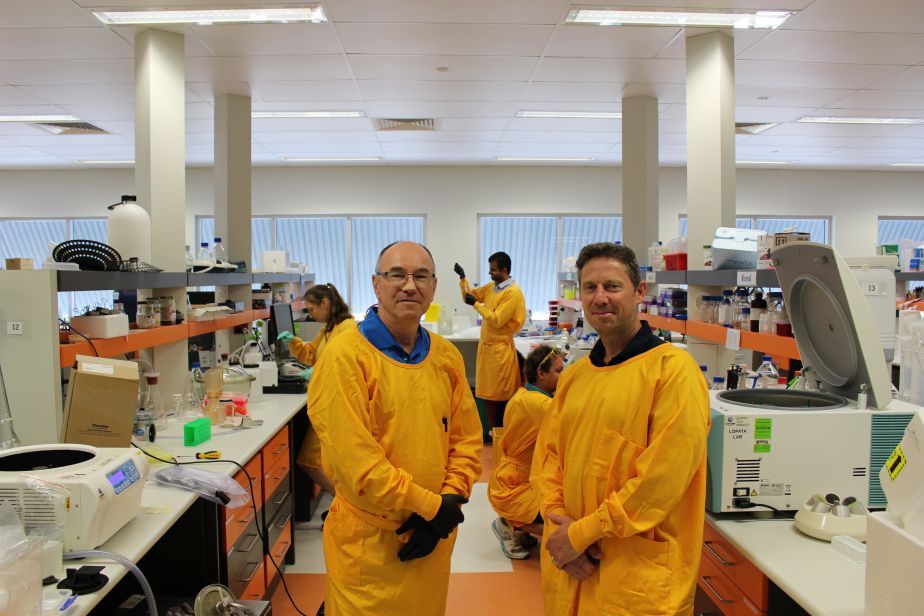 Professor Andreas Lopata (L) and Michael Sheridan (R) in the lab at JCU.

Scientists who tested a shopping trolley-sized collection of food imported from Asia have found that nearly half of the samples were contaminated with potentially deadly, undeclared allergens.

“Allergens not listed on the product labelling were detected in 46 per cent of the products analysed, with 18 per cent containing multiple undeclared allergens,” Professor Lopata said.

Professor Lopata said food allergies are increasing globally with Australia having one of the highest incidences of food allergy among children.

“Hospital admissions for food-induced acute allergic reactions rose by about 350 per cent in Australia between 1997 and 2005 and increased a further 150 per cent over the next seven years to 2012,” he said.

China was the source of products with the highest number of detectable, undeclared allergens, followed by Thailand and South Korea.

Professor Lopata said while food labelling appears well regulated in Australia, it’s less well-regulated in some Asian countries.  “That’s of concern, with Australian imports from ASEAN countries (Association of Southeast Asian Nations) increasing from 18 to 23 per cent from 2002 to 2012, and the food trade from Asia to Australia continuing to increase by about 2.5 per cent each year.”

He said authorities in Denmark, Norway, Sweden, and Finland performed extensive studies of imported food in those countries and found that 10 per cent of products where not correctly labelled with the detected allergens.

“With the increasing number of food recalls and anaphylaxis recorded in Australia it’s very important that further action continues in the area of food allergen labelling for the protection of allergic consumers here,” said Professor Lopata.