Uni and Army set for showdown 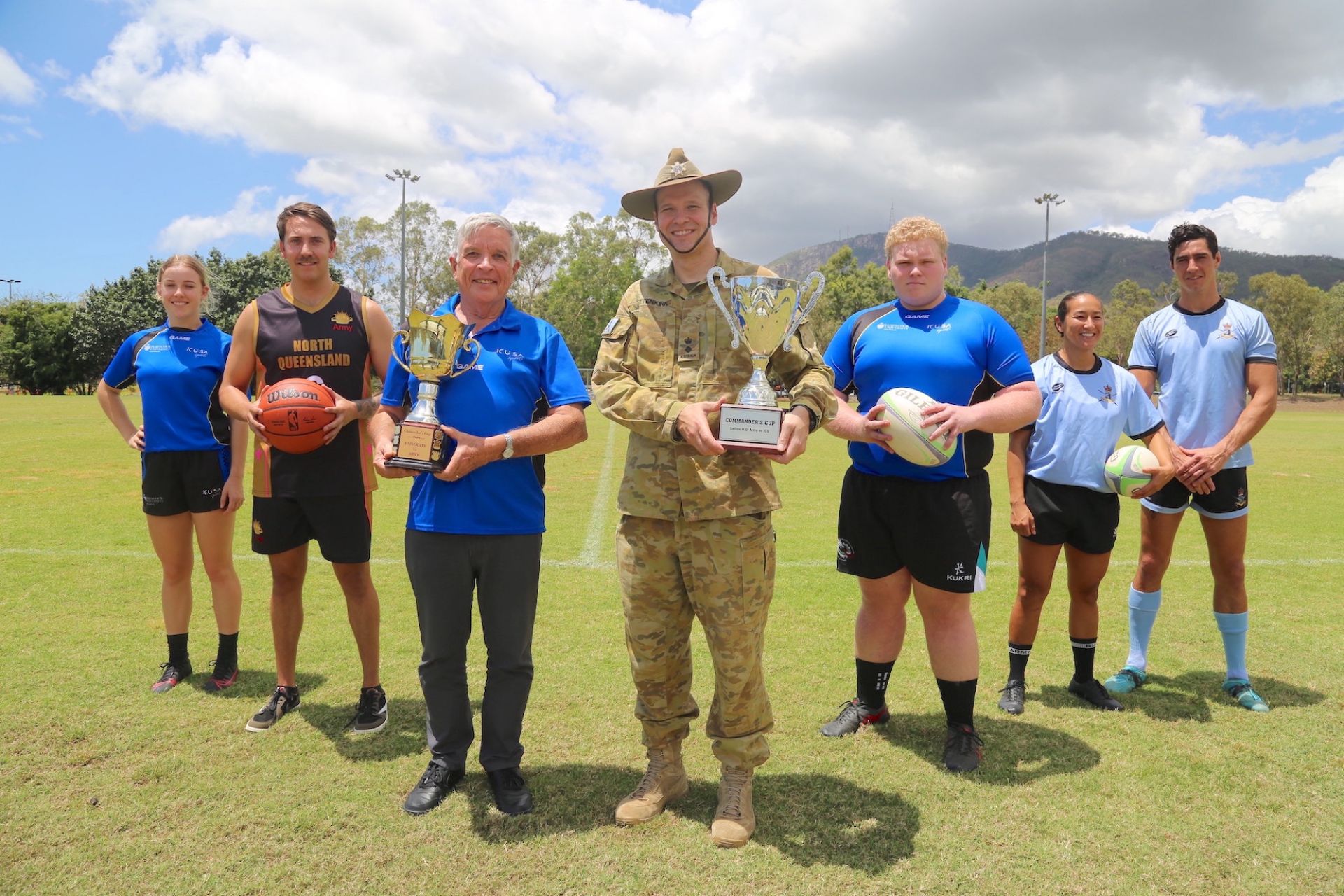 JCU Chancellor Bill Tweddell and Lt Colonel Grant Shottenkirk from the Army’s 3rd Brigade (centre) with players from the Uni and Army teams ahead of this Friday’s Uni vs Army Games.

James Cook University and the Army will ‘bring out the big guns’ for bragging rights ahead of a major tournament later this week.

The annual “Battle of the Icons” Uni vs Army Games promises plenty of action as teams clash in rugby, basketball, netball and mixed touch football this Friday.

Adding extra spice will be a new sport category, mixed netball, while soccer will instead be played between JCU and Riverway JCU Football Club.

“It was fantastic to see the passion and rivalry on display during last year’s Games and this year will be no different,” he said.

“The intensity and skill shown by these athletes underscores why the Games are a must-see event for the community.”

Teams competing in basketball, netball, soccer and touch football will vie for a Battle of the Icons Cup, while the traditional JCU Chancellor’s Cup and JCU Commander’s Cup will be held for the men’s and women’s rugby games respectively.

Replicating last year’s success, all games will be held on the same day, with basketball and netball played at Townsville Stadium followed by soccer, mixed touch football and rugby at Joe Baker Field on JCU’s Bebegu Yumba Campus.

“It’s going to be an action-packed day and I’ve got no doubt these teams will be looking to prove themselves again and settle a few scores,” Mr Conn said.

JCU Chancellor Bill Tweddell said the Games were a credit to the longstanding ties between JCU and the Army and “reflect the commitment which both of us have to the importance of healthy mind in a healthy body”.

“The Games are a much-loved fixture on our annual calendar and only strengthen our relationship with the Army,” he said.

“We both serve our community in different but crucially important ways and we are immensely proud of the legacy we have built over the decades in Townsville.

“I wish all teams the very best of luck in the Games.”

Commander of the Army’s 3rd Brigade, Brigadier Kahlil Fegan, said it is exciting to see the iconic organisations go head-to-head on the field.

“Sport is a big part of defence culture; it breeds friendly rivalry, physical endurance, team work and a spirit of competition,” he said.

“Playing against the JCU teams for the annual Battle of the Icons, JCU Chancellor’s and JCU Commander’s Cups is a really fantastic opportunity for our soldiers to have a bit of fun in the community and share in the strong local sporting culture.

“I hope the community come out to support the players on Friday the 14th and may the best teams win!”

Match schedule, Battle of the Icons Uni vs Army Games