Medicine legacy in the tropics The end of an era

After 15 years at the helm of James Cook University medical education and research in Cairns, Professor of Medicine John McBride has called it a day.

From heading up the Cairns Clinical School, to ground-breaking infectious disease research and pandemic planning, Professor McBride has made his mark on medicine in the tropical north.

Professor McBride joined JCU in 2005, as the medicine program expanded to Cairns and Mackay. He’d spent the previous eight years as the one and only Infectious Disease Physician and Microbiologist at the Cairns Hospital. He said he joined the University to pursue his passion for research and education.

“It was a pretty seamless transition from Queensland Health to JCU,” he said. “I just moved from one office in the Cairns Hospital, to another office. But my role was different. That move coincided with the first cohort of fifth and sixth-year medicine students coming up to Cairns. The fifth-years included people like Dr Aileen Traves, who is now a Senior Lecturer in General Practice and Rural Medicine at JCU.”

During his time as Head of the Clinical School, Professor McBride rode the wave of progress. The Cairns cohort expanded rapidly from just 15 students to more than 60. While a challenging time, he said one of his biggest highlights was seeing students return as practising specialists.

“When you see some of those former students graduate, go away and work and then eventually return to the public or private hospital system in Cairns, it’s quite humbling,” he said.

“It’s great to see the gradual replacement of doctors and specialists who had come from outside of the region. Now there's a growing percentage of our medical workforce populated by JCU graduates.”
- Professor John McBride

Professor McBride’s passion for research stems back to the early 80s when he worked as an Army Medical Officer. After completing his pay-back years to the Army, while living in Townsville, he completed his infectious disease and tropical medicine training and decided to enrol to do a PhD. It was during that time he caught the research bug.

In the months before officially starting with JCU, Professor McBride worked on a translational research project in New Guinea. The project aimed to roll out the prescription for the use of antiretroviral drugs in people with HIV.

“I had a strong interest in HIV and I saw this as a great opportunity. I'd been going up to New Guinea regularly prior to that. So there was an opportunity to become a consultant, starting a program which was a short-term three month thing. We were able to do the planning and start the prescription of the use of antiretroviral drugs. That's grown to be an enormous activity in New Guinea. I'm immensely proud of that.”

Once on the ground at JCU, Professor McBride wasted no time in applying for grants to continue his research. He managed to secure funding for a project that would test if temperature screening of international travellers could help prevent the spread of Dengue Fever.

“We knew that every Dengue outbreak started with someone coming in from overseas, usually places like Bali or other places in Southeast Asia. With the funding, we employed a research coordinator and nurses to carry out testing,” he said.

“We used infra-red cameras at the Cairns International Airport. We screened over half a million passengers, to look for people with fevers. We would then pull them aside and ask them to participate in research, which involved taking blood samples and trying to work out what they were suffering from.”

Professor McBride had seen the process implemented successfully in Taiwan and wanted to test its effectiveness in Australia. “They introduced temperature screening around the time of SARS. They managed to pick up patients with Dengue, Chikungunya and other types of infections,” he said.

“However, we concluded in Cairns that it probably wasn't the best way to go. We realised you would only pick up a small percentage of the cases that import Dengue. In the meantime, the other exciting research that's come out of JCU is with the Wolbachia carrying mosquitos. That project seems to have eradicated Dengue from Far North Queensland. So that's been a fantastic achievement over the last 15 years or so. We haven't seen a case for years now. So it's been very successful, and very satisfying.”

The projects Professor McBride has turned his attention to more recently, revolve around COVID-19. He is looking at better ways of diagnosing people with fevers, learning from the developments of the unfolding pandemic.

“We know that when the next pandemic or unknown disease rolls around, we are not going to have a test for it. There are better ways, I think, of approaching patients with undiagnosed fevers. Doing tests that have a better chance of uncovering new and different organisms that might emerge in places like Far North Queensland and the Tropics. Because this is where some of these diseases emerge,” he said.

“I think we need a better way of being able to discover new pathogens. So that's where we are at the moment and doing research at the Cairns Hospital on sequencing.”
- Professor John McBride

No stranger to pandemics, Professor McBride has worked through SARS, the H1N1 Flu and now COVID-19. He said SARS had a big impact on infection control practices.

“I was working with Queensland Health at the time. Everything changed with SARS. A whole bunch of infection control practices became much more important, much better recognised during and after the outbreak,” he said.

“Then the pandemic H1N1 flu came along. By that time I was working with JCU, so I wasn't as intimately involved. The bulk of the heavy lifting was to happen within Queensland Health. But certainly, we needed to be across it in JCU.”

Professor McBride said the learnings and planning from the first two pandemics were a useful tool in steering JCU through COVID-19.

“I said to Professor Ian Wright, the current Head of the Cairns Clinical School, that this was a ‘Plan-demic’,” he said. “It’s involved multiple meetings and planning and so on, so it sort of feels appropriate to rename it.”

Professor McBride spent 2020 gearing up for the possibility of launching final-year JCU Medicine students into the hospital workforce, ahead of graduation, to help the system cope with an influx of pandemic patients.

“We were planning how final-year students might be employed by Queensland Health, for the surge of activity, which happily didn't eventuate,” he said.

“We're currently looking with horror at what's happening in the UK and in the US and thank goodness that our students were not in the end required. But the students were excited and we were excited about the possibility of our final-year students being able to contribute and make a difference in the COVID outbreak.”

Ready for retirement (sort of)

Professor McBride was a victim of ‘COVID-19 delay’ along with the rest of the world. 2020 was going to be his year to retire, but he decided to stay on board to help the University navigate the complex terrain of the pandemic.

“Some people leave employment because they've got another job to go to. I was leaving at a time of my choosing. But at the time there was a need, so I just shelved all of the plans that I'd had. A lot of the plans, mind you, would not have been possible anyway with COVID,” he said.

Having bid the Medicine class of 2020 farewell, in a very personal graduation-style ceremony last December, Professor McBride has now turned his attention to what his future will hold.

“I am still clinically active and although in the hospital they appointed another infectious disease position when I moved over the JCU, there's now five of them. But none of them do any work in private. So I will cover the private hospital for any infectious diseases advice and consultations. I still see patients in my rooms. So it's not a complete wind back.”

Professor McBride will stay on at JCU as an Adjunct Professor and continue his hospital volunteer work.

“I'll continue to take an interest in the medical school and help out when needed and give the occasional lecture and come to journal clubs and grand rounds and keep mentally active,” he said.

“I'm on the board for the Far North Queensland Hospital Foundation. There's a couple of medical people on the board who I help with research applications. It’s volunteer work that's quite a satisfying.”

A passion project he has in the works with the Foundation is helping Cairns achieve University Hospital status.

“That benefits both Queensland Health, the hospital and also JCU. It's a high level master plan to progress services, teaching and research at the hospital,” he said.

“They are things I'm passionate about. I'm helping where I can on the board, to realise a dream of our hospital here in Cairns becoming a University Hospital and raising the profile of research and teaching. It’ll keep me relatively busy, but I will still have a bit more free time.” 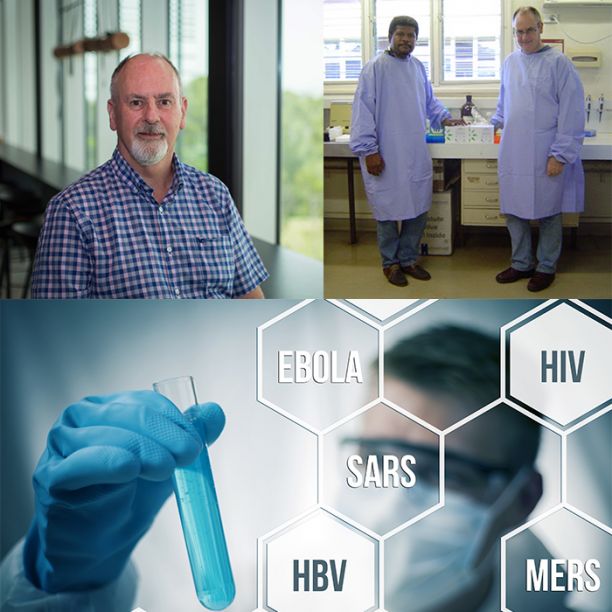 John McBride is a Cairns based Infectious Disease Physician and Clinical Microbiologist. He was formerly Professor of Medicine and Head of the JCU College of Medicine and Dentistry Cairns Clinical School for 15 years. He is President of the Australasian College of Tropical Medicine and on the Far North Queensland Hospital Foundation Board. Areas of interest in research include HIV, Dengue Fever and infectious disease sequencing for better pandemic testing.