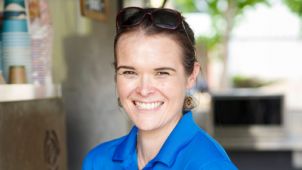 Cone snails are one of the animals we’re told to steer clear of when out on the Reef. But what if your job involves collecting, feeding and studying them?

Cone snails are a type of mollusc, one of the most diverse groups of animals on the planet, which have evolved to live on and around coral reefs. There are many cone snail species which can look very different and have different venoms and toxins — some of which require urgent medical attention if they sting you.

The venom comes from a harpoon which the animal uses to paralyse its prey, and the level of toxicity generally depends on the type of prey the animal eats.

So, what is it like to work with cone snails as part of your job?

“It’s fun, it’s a bit exciting,” she says. “It’s not something you get to do every day so it’s quite a nice privilege.

“It is something you do have to remember all the time that you do have to be careful and you have to tell everyone who’s working on the project with you and make sure they’re up to date with risk and incident procedures.”

Caution is the key

Caution is important at all stages of working with the animals, starting with collecting them out on the Reef.

Sue-Ann and her team have a special collection permit to gather the cone snails, which they do while snorkelling in shallow reef areas.

“We will collect them over the course of a few days,” she says. “We use tongs, so when we see them we snorkel down and we get our net and we get our tongs and we gently pick them up and pop them in a net. We also have gloves on.”

From the net, the snails are placed in a thick plastic bag filled with seawater which is placed inside a second bag. This bag is then held at arm’s length.

Back in the boat there are compression bandages, which are used to treat any stings through compression, immobilising the limb – similar to the treatment of a snake bite.

“We also have emergency kits on the boat including oxygen, as you might need to administer that if someone got stung by a particularly venomous one,” Sue-Ann says. “And we have a radio to contact Lizard Island or any of the boats around there for help.

“There are lots of emergency protocols. Very quickly there will be someone who comes to your help and there’s the helicopter evacuation option if it comes to that.”

And when it comes to interacting with the snails in the lab for experiments or feeding, the team makes sure to do it at a distance to avoid the harpoons.

“When we do the behavioural assays, we’ll place the prey using the tongs so it’s a set distance in front of the predator, so we wouldn’t want to go too close,” Sue-Ann says. “To feed them, we generally use a net and gently release the prey onto the sand. We don’t want to put our hands within a certain radius of the snail.”

When she came to Australia from England, Sue-Ann had to brush up on her knowledge of how to respond to dangerous animals.

“Coming here to Australia I had to get my brain into a whole new gear when I was thinking about venomous animals,” she says. “Getting used to the fact that you should check for crocodiles and snakes, it takes a while to re-train your instincts. Obviously being cautious about stingers in the water, being aware of sharks.”

Cone snails do live in our region and they’re something to be aware of when visiting the Reef.

“Never walk on the coral but if you’re walking on the sandy areas or the rocky areas do wear protective footwear like wetsuit booties or something like that,” Sue-Ann advises. “Do be aware that you could stand on a cone snail — and if you see one, don’t pick it up!”