29 August is the International Day Against Nuclear Tests. Dr Elizabeth (Liz) Tynan tells us about the top-secret atomic tests in South Australia in the 1950s and 1960s, and why many Australians are still affected today by the fallout and dispossession.

Australia in the 1950s was a very different country from what we know today.

“Australia was a bit of a backwater. The ‘White Australia Policy’ was still in force,” Liz explains. Immigration was accepted only from Europe, and Aboriginal people were not recognised at a federal level and not included in the national census. “There was not a whole lot of diversity. Many Australians still considered England home, even if they never visited. It was the ‘mother country’.”

Besides, World War II had been over for just a few years, and people were worried about communism taking over the world and the prospect of another world war. Australia didn’t have close military ties with the United States, yet, and it felt it needed a strong ally. “Australia was ripe for exploitation by its former colonial master,” Liz says.

Between 1952 and 1963, Australia allowed the United Kingdom to conduct nuclear tests at the Monte Bello Islands in Western Australia and at Emu Field and in Maralinga in South Australia.

Maralinga is a remote place, about 250 kilometres from the Western Australian border and 1,200 kilometres east of Adelaide.

During the nuclear tests, Maralinga became a home to thousands of mostly British and Australian military personnel. “They built a whole village in no time at all. It had a cinema and a swimming pool. All kinds of comforts. Apparently, it was not too bad, as a place to live. But of course, people who stayed there were exposed to radiation in many cases. Not all, but in many cases.” The radiation was produced by seven plutonium bombs and further ‘minor trials’ that produced dangerous radioactive waste.

Although atomic weaponry was still relatively new, the British did know about the dangers of radiation at the time. However, personnel stationed at Maralinga were not always told about the potential consequences of being in the vicinity of atomic weapons tests. “All the people stationed there had to wear ‘film badges’, which were intended to show exposure to radiation. But the film badges were almost never analysed,” Liz says.

It was not only military personnel who were affected by the weapons tests.

There were thousands of Indigenous people living throughout the area as well. “In many cases, they were walking great distances. They didn’t necessarily know that they were walking into a military area, which was a very large area. One family was found camping beside a bomb crater, the only bomb crater at Maralinga,” Liz says.

The original occupants of the Maralinga lands were largely turned away from the test site, though, and in some cases they were removed. “They were loaded on trucks or other kinds of vehicles and taken down south to Yalata and other places on the Great Australian Bight,” Liz explains. “It’s a pretty sad story, it’s dreadful really.”

Changing their way of life turned out to be traumatising for many. “The tests completely disrupted the old ways of living. They no longer could follow the traditional tracks that had been laid over millennia. They lost their waterholes and other traditional sacred sites.”

Radioactive Fallout all over Australia

The Australian Government did know that nuclear explosions created radiation, and trusted the British government that insisted the radiation was not harmful.

Hedley Marston, who worked as a biochemist for the CSIRO, “was hired to track the radioactive uptake by livestock in the area,” Liz says. “He went beyond what he was asked to do, and he set up monitoring stations in Adelaide. He detected fallout in Adelaide after a particular bomb from ‘Operation Buffalo’ in 1956.”

Air sampling stations were set up in places as far away as Townsville. “They were sampling the air for radioactivity. The British knew at the time that the atomic clouds were travelling over large parts of Australia, and not all of that was highly top secret. Some information was shared with the Australian Government, but it wasn’t shared with the main population of Australia, of course.”

As a result, the general public from Adelaide to Townsville was completely unaware what was happening, and so were the military personnel involved in the nuclear tests. “They had aircraft in the air that were tracking clouds, and a lot of these planes went through the atomic clouds and got contaminated.”

The consequences of radiation

“It is not so much a secret, it’s just that very bad records were kept at the time. The British were very lax when it came to that,” Liz says.

Liz says it is suspected that a large number of people who were exposed to the radiation developed characteristic sorts of cancers, like lymphomas, lung cancer and leukemia. But it gets even worse, Liz adds, because “in some cases the allegation is, and I think it is quite a strong allegation, that they passed on genetic damage to their children.”

Around 35,000 troops were stationed in Maralinga over the years. “A lot of them were exposed and a lot of them died young,” Liz says. This does not even count the Aboriginal people or other people who were living in the vicinity of the prohibited area.

The time bomb in our bodies

In 2023 it will be 60 years since the last nuclear tests in Maralinga ended.

Many people of this era who were directly or indirectly involved have passed away. But this does not mean that those who are still alive are ‘safe’.

Liz says that whoever was exposed at the time may still have a ticking time bomb inside them. “It’s a fairly unpredictable causal relationship between exposure and actually getting sick,” she says. “That’s why so many people have been very frustrated over the years, not being compensated or having their suffering recognised.”

What we can learn from Maralinga

There are certainly lessons to be learned from what happened in Monte Bello, Emu Field and Maralinga.

“I just think that we should be very wary of any government claiming to act in our best interest, because quite often they are not doing that,” Liz says.

“Government secrecy is extremely dangerous. In a democracy, we have to make sure there is transparency. Sadly, there is still insufficient transparency around the atomic test program, because even to this day the British still refuse to release records about some aspects of the tests.”

International Day against Nuclear Tests is an opportunity for stand up against nuclear testing. Find out how you can participate. 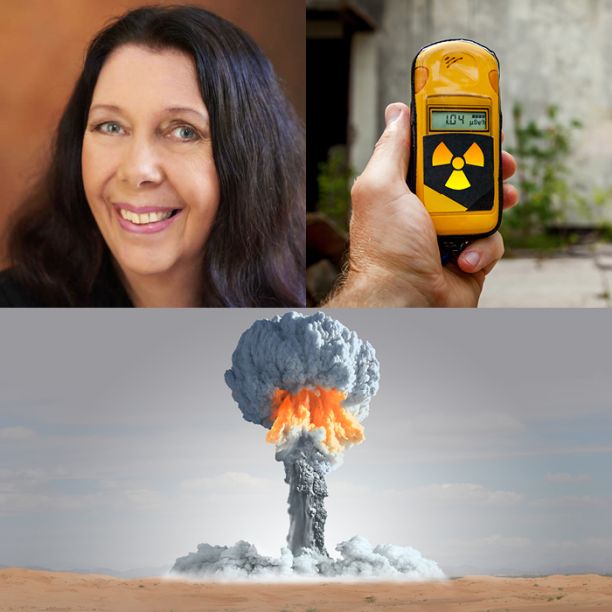 Liz is co-ordinator of the professional development program at the Graduate Research School. Her PhD from the ANU examined aspects of the British nuclear tests in Australia in the 1950s and 1960s.

Her book, Atomic Thunder: The Maralinga Story, won the Council of Humanities, Arts and Social Sciences Australia Prize for a Book 2017 and the Prime Minister's Literary Award (Australian History) 2017. She is working on a follow-up, for publication in 2021, titled The Secret of Emu Field. This book will investigate the history of the other British atomic test site in South Australia, Emu Field.