Listening to the sound of the Earth’s interior

The secrets hidden beneath our feet

We look to the stars to learn about our past, without thinking too much about what is happening right now, right beneath our feet. Dr Lauren Waszek studies energy from tiny earthquakes that are unnoticeable to human senses and uses artificial intelligence to speed up the work.

As a geophysicist and seismologist, Dr Lauren Waszek studies what lies hidden hundreds and thousands of kilometres deep beneath our feet. “The way I see seismology is as a telescope, but looking down into the earth. It is one of the only tools to observe the physical structures,” Lauren says.  “We are able to see energy coming from thousands of kilometres deep, with so much material in the way.”

But seismology also has practical applications. “In terms of the Earth’s mantle itself, the deepest structures affect what's happening at the surface,” Lauren says. “This is important for, obviously, earthquake hazards, but also mining and minerals.”

Even more so, what is happening in and around the core, at the centre of the Earth, is also what is keeping us alive. “The inner core is solid, and it is surrounded by the outer core, which is liquid,” Lauren says.

“The outer core solidifies onto the surface of the inner core as the Earth cools. This is what generates the Earth’s magnetic field. Without the magnetic field we wouldn't be here. Life would have been eradicated by the sun’s radiation. This is why it’s important to understand how this process is evolving over time.”

Since 2017, Lauren has been working on a research project that explores the composition of the Earth’s crust and mantle beneath Australia. As part of this, she installed some seismic instruments in collaboration with colleagues at the Australian National University. “My particular instruments are in the Northern Territory, about an hour south of Tennant Creek,” she says. “We had to install them in in 40 degrees Celsius with the flies trying to eat us.”

The sensors have been in the ground for more than three years, and they will be taken out some time later this year. “The sensors are small, with a battery and a hard drive that records all the information, and then solar panels to keep the power going.”

The entire installation is only as tall as Lauren’s knee. Before the sensor was buried into the ground at a depth of about half a metre, it was all packaged together and then wrapped up.

“Including the solar cell, the installation is maybe a metre by half a metre, with the solar panel angle towards the sun,” Lauren says. The heat, dust, and the flies are not the only problem when it comes to installing a seismic sensor in a remote place. “It is all wrapped up in netting so that wild animals, such as horses, don't try to eat it in case they manage to get there.”

Getting the data out of the outback

After the seismometers have been taken out of the ground later this year, the next phase of Lauren’s research project begins. The seismometers measure Earth’s ground motion, and the output looks similar to audio signals . “I will take the observations from the earthquake waves, and then do some modelling based on potential compositions and temperatures, and then try to connect that to the dynamics of the Earth,” Lauren says.

“Think about the hot plumes coming up in the volcanoes of Hawaii, for example,” she says. “I try to figure out how what we see physically ties into the composition and the subsequent dynamics and the motion of the Earth’s mantle. That's my current goal.”

Only a couple of years ago, Lauren would have had to identify the particular signals she needed manually, and that takes time. She has done this already for previous projects. “That could get a bit boring,” she says.

However, neural networks and artificial intelligence will take over this rather tedious task. “I had a Master's student in New Mexico who came with a computational background,” Lauren says. “He developed an algorithm to train a computer to automatically identify the correct signals.”

How a cup of coffee can influence a dataset

But how do you train artificial intelligence? Only by doing the legwork first. When a human is analysing the data, they have to go through it and look for the ‘wiggles’ that correspond to the energy that the scientists are studying.

The science of speed

There is more. “It took me about eight months to manually compile the data I needed,” Lauren says.  “It takes about 16 hours to get a similar dataset on a supercomputer running on 12 nodes and 16 cores. It does take a bit of computational power, but to be able to have a complete data set within a day is amazing.” She adds that a computer finds it easy to identify and discard waves that are simply ‘noise’ and not useful for the researcher.

Lauren’s eight months of handpicked data weren’t made redundant by the artificial intelligence, though, because her data was used to train the code, to make it understand what the scientists were looking for.

Lauren says that even though using neural networks and artificial intelligence is not completely new in seismology, the code she and her student developed is still a step forward for the study of seismic waves.

“There is so much data being generated right now, and there's only so many PhD students that you can persuade to sit in front of a computer and go for it,” she says. “A PhD student or a postdoc’s skills are much better applied to developing an exciting new code.”

Sharing seismic data around the world

One thing that Lauren loves about geophysics is the spirit of sharing. “In seismology, most of the recorded data around the world is shared with the community ,” Lauren says.

“I can go to a website, and I can literally download data from, let's say, 8,000 different instruments, all around the world, for any earthquake.” The datasets that are already available will make it easier for Lauren to compare her results from her new recordings with others, and might help other researchers around the world to do their work as well.

Measuring the bottom of the sea

Looking into the future, Lauren is currently thinking about transitioning from the outback to the sea. “A recent advance in seismology are ocean bottom seismometers , such as those recently installed by an Australian-led team near Macquarie Island,” she says.

“You drop the instrument down to the bottom of the ocean and then you come back a year later and pick it back up”. As a potential location she has the Coral Sea off Queensland in mind if her research team can get permission to install the seismic sensors there.

When asked about why it is important that women and girls become scientists, Dr Lauren Waszek says it is essential to have equal representation across science.

“Women scientists are amazing,” she says. “I've always been especially keen to support women in science and supported them to join my group. My PhD advisor was female herself and I know from own experience how important it is to have an inspirational role model who shows you, ‘I could see this for myself, this could be my career, this is doable’.”

Are you interested in Earth Sciences? Find out more. 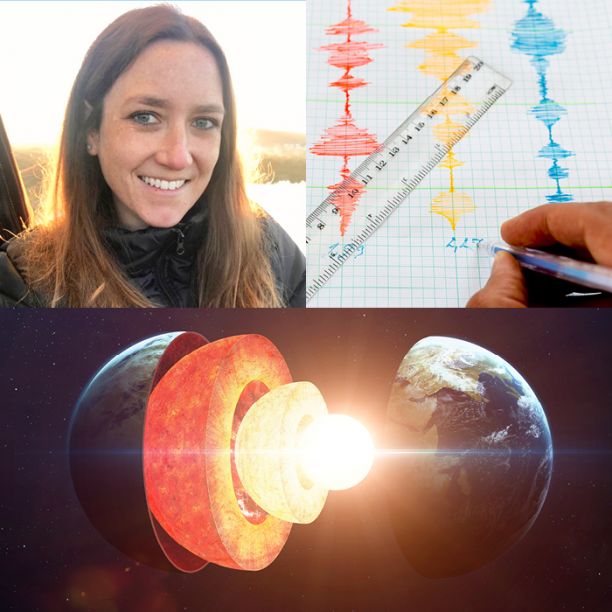 Lauren Waszek is a global seismologist, researching the seismic structure of Earth's deep interior from the inner core to the surface. Her current research projects explore the correlation between seismic structures, thermochemistry, and geodynamics of Earth’s mantle, with a particular focus beneath the Australian tectonic plate. She is working on the application of machine learning methods to automatically identify seismic wave phases, and developing new observational analytical techniques for seismic data.

Lauren’s research seeks to constrain the relationship between the dynamics and composition of Earth’s mantle and crust to surface activity, via integration of seismic observations with mineral physics and geodynamical modelling. The overarching goal is to generate and interpret the first order seismological observations required to understand the processes and evolution of the outermost layers of our planet.