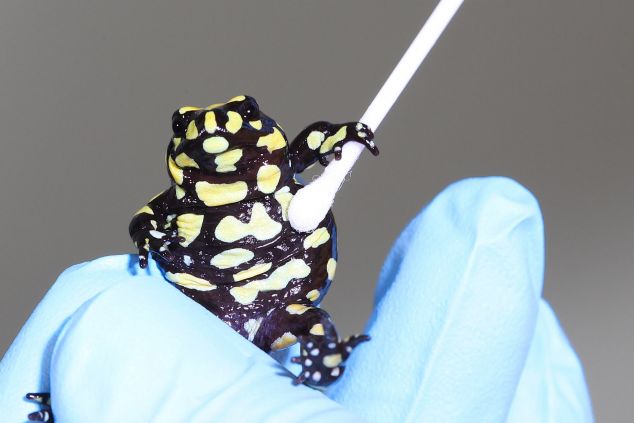 Corroboree frog getting tested for chytrid.

New research has revealed a deadly disease that threatens the survival of the world’s frogs originated from East Asia, and global trade was almost certainly responsible for the disease’s spread.

The frog chytrid fungus (Batrachochytrium dendrobatidis) has long been identified as a cause of the decline and extinction of species of amphibians across several continents since the 1970s.

It has spread around the world but until now it has remained unclear where killer strains of the pathogen first emerged.

An international team of researchers led by Imperial College London, including four scientists from the One Health Research Group at James Cook University, traced the ancestor of the pathogento a single strain in East Asia.

Their findings support the idea that rather than dating back thousands of years, as previously thought, the range of the disease expanded greatly between 50 and 120 years ago, coinciding with the rapid global expansion of intercontinental trade.

According to the researchers, human movement of amphibians – such as through the pet trade – has directly contributed to spreading the pathogen around the world.

JCU’s Dr Lee Skerratt, one of the authors of the paper, said the findings highlight the importance of global biosecurity measures.

“Australia has strict rules and regulations surrounding biosecurity and this finding confirms why regulations are so important,” Dr Skerratt said.

“We hope this news will push policy change in countries with less strict biosecurity measures.”

The team also uncovered additional strains of the fungus that could cause further species decline, highlighting the importance of strict biosecurity policies.

“If more strains are allowed to spread we could see additional extinctions,” Dr Skerratt said.

“Countries need to act now to improve regulations before these additional strains spread.”

Chytrid fungus causes a disease called chytridiomycosis that leads to heart failure, and is responsible for the decline or extinction of hundreds of species of frogs.

These findings come on the 20th anniversary of Dr Lee Berger’s discovery during her PhD that the chytrid fungusis the cause of global amphibian species decline.

Dr Berger led the Australian contribution and was an Australian Research Council Future Fellow and Postdoctoral Fellow at James Cook University from 2004 to 2016.