Every year, 13 million tonnes of plastic leak into the ocean and contribute to killing more than 100,000 marine animals.

World Oceans Day was founded by the United Nations to raise awareness of this global environmental catastrophe, and to unite everyone to sustainably manage and care for the world’s oceans. 2019 celebrates World Oceans Day with the theme of ‘gender equality’, hoping to empower women and recognise their contribution to the fight against pollution and climate change.

To celebrate this year’s World Oceans Day, JCU spoke to ‘fish physiologist’ Dr Jodie Rummer, whose impressive work in marine science is breaking down barriers for aspiring female scientists. Jodie’s journey to become a prominent voice for women in science began when she was young.

“I grew up in Illinois, in the U.S. – not surrounded by oceans at all. The only experience I had was from watching National Geographic and other documentaries on TV. I was given a mask and snorkel set for my birthday when I was five or six, and it was all over for me – I could breathe underwater and that was the best thing ever!”

But it was what Jodie didn’t see on TV that inspired her most.

“I couldn’t have told you the names of any famous female marine scientists back then. I didn’t have any female role models,” she said.

She has been on a mission to change that for the next generation of aspiring female scientists and has since achieved some remarkable milestones in her career.

Taking a bite out of pollution

As well as becoming a senior fellow at James Cook University, Jodie has given a TEDx talk, been featured on the Discovery Channel and even raced fish against Michael Phelps.

“One of my catch phrases is, ‘If you can see it, you can become it’. So, it’s important for me to be a visible role model and show the next generation – perhaps that nine-year-old girl growing up, perhaps surrounded by farmland – that you don’t have to be an old white guy in a lab coat. You can be outdoorsy and feminine and sporty… whatever you want to be… and still be a successful scientist.”

Jodie leads a large research program working with baby sharks in French Polynesia. She studies the physiology of these sharks to monitor how they can adapt and cope with changes in their environment.

“Fish are amazing athletes – they use their athletic abilities to live in almost every body of water on the planet,” Jodie said.

Jodie and her team conduct non-lethal studies on the baby sharks to find out how much they’re breathing before and after exercise. They can then change the sharks’ environmental conditions to mimic the year 2050 or the year 2100 to see how elevated temperatures affect the sharks’ breathing rates. Their results help scientists understand how sharks and other marine life may cope as climate change continues to alter their environment.

One contributing factor to the long-term health of sharks and other marine life is the amount of plastic pollution entering our waterways and oceans. Jodie says the first step to solving this problem is educating people on where their rubbish actually goes.

“When we throw our rubbish in the bin, we never see it again. But it doesn’t just disappear – it goes somewhere. Depending on which country you live in, it could get put on a barge and dumped in the ocean. Or it could get buried or dumped on an island. But unless that rubbish is made of organic material, it won’t degrade back into the earth. It will eventually run off into a water source.”

“I grew up in Illinois – the middle of the United States, right next to the Mississippi river, the largest river in the U.S. That river drains into the Gulf of Mexico, which drains into the Atlantic Ocean. Everything is connected and it will get back into the oceans at some point.”

“Now, more than ever, we need those brilliant minds – all genders, all cultures, every background possible – to help solve the problems our planet is facing.”
Dr Jodie Rummer, JCU Researcher

It seems like an impossible problem, but Jodie is adamant that the choices of one person can make all the difference.

“What about Molly Steer from Cairns, who made that decision for straws not to be used anymore and started a revolution. That one voice? That made a world of difference. What about Greta Thunberg, who started the climate strike for kids coming out of their schools on that Friday afternoon? That started a revolution,” she said.

“We have to use our voices, lead by example and have amazing conversations with people about the steps that we’ve taken to help the planet.”

“We vote with our dollars. If you purchase something packaged in single-use plastic, you’re saying that’s OK. But you go to a whole foods store and use a reusable container, you’re voting for sustainable packaging.”

Some other ways to cut back on plastic and greenhouse gas emissions include riding your bicycle to work, using reusable straws and coffee cups, and switching to a predominantly plant-based diet.

Jodie hopes that more people can learn about the harmful effects of pollution on the ocean and make changes to protect Australia’s unique marine life.

“There are lots of different faces and voices in science today, and now, more than ever, we need those brilliant minds – all genders, all cultures, every background possible – to help solve the problems our planet is facing. That’s my inspiration.”

Find out more about World Oceans Day and how you can #BeatPlasticPollution. 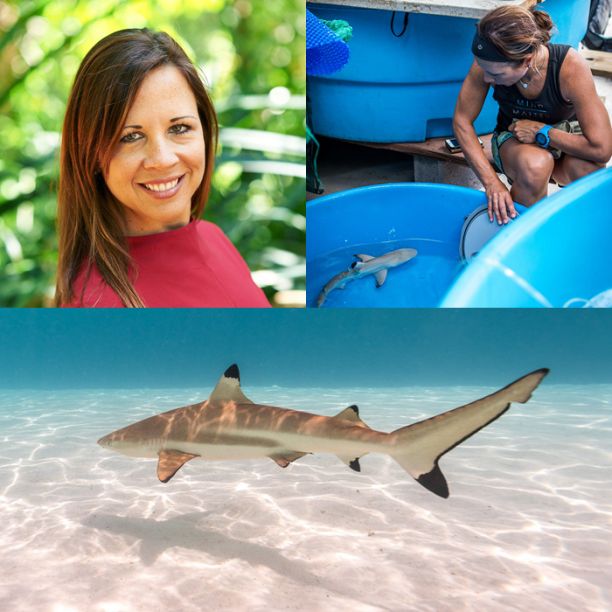 Jodie Rummer is a leading authority on the evolution of oxygen transport in fish and how performance is maintained during stress. Her research combines physiology, ecology, and evolution to address issues important to conservation, such as the effects of climate change and other human-caused problems on fishes, including sharks and stingrays, and the potential for adaptation.

Beyond her research, Jodie also champions for issues that women and other minorities face in the STEM fields, advocating for diversity, inclusion, and equity. Jodie also emphasises and puts into practice effective and creative science communication.