Streets that tell a story

How Queensland’s local and national narrative is written into Townsville’s street and place names.

Flinders Street. Boundary Street. Jezzine Barracks. All places in Townsville that most residents find themselves in their day-to-day lives. But these aren’t just empty names that get people from A to B; they write a rich, and sometimes controversial, narrative of the history of Townsville.

JCU Education lecturer Bryan Smith has been obsessed with maps since he was a little kid.

“I thought, how can I use that to talk about something that people will pay attention to?” he says.

A specialist in geography, history and colonisation, Bryan has published several works on how place-names are a way to engage with a town’s history. Along with colleague and historian Dr Claire Brennan, the two are passionate about exploring how the narratives of Australia are written into the maps of communities.

Street and place names are an important medium for the state to normalise the narrative of Australia’s history. By having more conversations about why locations are named the way they are, we can begin to see how the otherwise meaningless names become a way to tell a historical story.

“We see ‘days’ as celebrations – ANZAC day celebration, or Queensland day celebration – but we forget that history is written into various parts of our community. We need to pay attention to that,” says Bryan.

Queensland officially separated from New South Wales in 1859, an occasion that is celebrated on Queensland Day, the 6th June. Queensland itself was named after Queen Victoria and echoes Australia’s historical narrative in the Victorian era.

“Queen Victoria is reflected so strongly in the names of Australia,” said Claire. “She gets a state in the south (Victoria), and that was named first, so we had to settle for Queensland.”

Townsville’s streets and locations are named after people deemed to be historically significant, either in a local or national capacity.

“A variety of streets downtown are named after the people who ran successful businesses in the area,” says Bryan.

“Then there are over 100 streets named for soldiers or particular battles or aircraft we used, since Townsville was an important air base for the war in the Pacific,” says Claire. “These names represent the local context trying to assert its place in that national narrative.”

Silence tells its own story

Just as place names tell a historical narrative, those that are not represented tell a story of their own.

“I was struck by how few women are remembered. Only about 25 streets are named after women,” says Claire. “At least four of them were named after Queen Victoria, and a number of others were named for her daughters.”

And despite so many street names reflecting Townsville’s military history, none in the central suburbs are named for army nurses. Bryan says it is not surprising that history in Townsville is remembered this way.

“It makes sense in the public’s imagination of the past to marginalise remembrance of women because we don’t often talk about women when we talk about the past generally.”

Claire agrees. “The narrative of these street names form a backdrop to our everyday lives, and it’s hard to break away from that and think about what other narratives and histories exist around that.”

Claire also says that some versions of history are more comforting than others in the Australian context, particularly when it comes to accepting the massacres that occurred on the Australia continent when it was first colonised.

“It’s difficult to accept. It’s confronting. It’s hard to know how to have those conversations.”

But conversation, no matter how difficult, is a key way to engage with the past.

“We need to do a better job of having conversations about the past, and an important first step is talking about the histories we don’t talk about at all,” says Bryan.

Engaging with our past is an ongoing process.

“We continually need to reconnect with the past; we can’t imagine that history is done, and there’s no different version and there never will be,” says Claire.

“There’s no right way to do it. If you rename every street centre there are still going to be people who are excluded. We need to just get on and make history - find ways to interpret and understand the past, and get it to help us make sense of the present. Every generation needs its historians.

“James Cook University is the perfect place to write the history of Northern Australia, and we’ve got to get on and do it because it’s so rich and so wonderful and it’s right in front of us.”
JCU Historian Dr Claire Brennan

“Bryan’s project shows very clearly that Townsville and what happens in Townsville can contribute to national history narratives, but Townsville also has a really rich history of its own, as does tropical Australia. James Cook University is in the perfect place to write the history of Northern Australia, and we’ve got to get on and do it because it’s so rich and so wonderful and it’s right in front of us.”

Live in Townsville? Find out the origin of your street name.

Write the history of North Queensland for the next generation 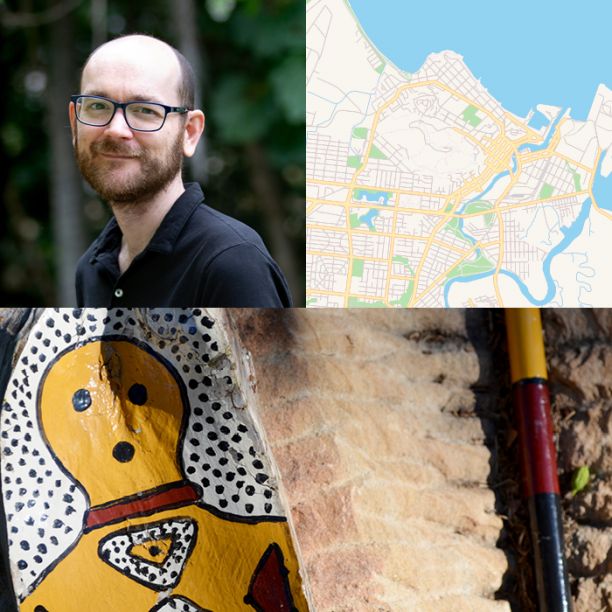 Dr Bryan Smith is a lecturer in Education at JCU. His work looks at critical approaches to humanities and social sciences education, with a specific focus on how to foster anti-racist and decolonising approaches to learning.

Sitting at the intersection of geography and history, Bryan seeks to better understand how we might support students as they begin to interrogate and critically question how the community spaces we call home, through their naming practices, tell certain types of stories, often those that privilege and normalise white, settler men and their experiences. Further, his work involves the creation of digital applications to help visualise and critically unpack these limited stories and their narration at every street corner.