New technology will be placed in several parks throughout Townsville to record wind speeds during tropical cyclones. 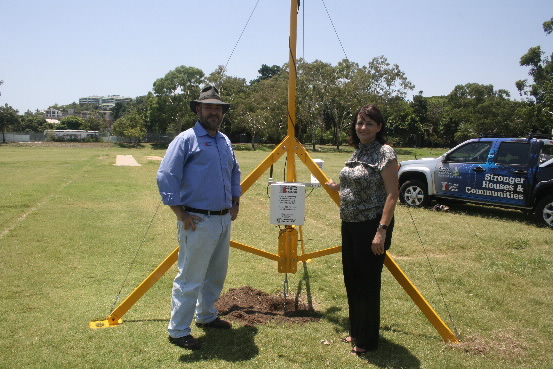 New technology will be placed in several parks throughout Townsville to record wind speeds during tropical cyclones.

The devices, known as relocatable anemometers, are used for research in the tornado regions of the United States.

“Most of us unfortunately know the ferocity of a tropical cyclone and the vital need for optimising our preparedness and recovery times,” Cr Hill said.

“Previously we’ve had to rely on estimates of wind speeds, through numerical models, the occasional anemometer and by analysing damage to street signs.

“These relocatable anemometers are easily deployed in the 48 hours before a cyclone makes landfall to record data that can then be relayed instantly to various authorities via the 3G network and later be used in evaluating our building codes.”

“SWIRLnet will provide a great boost to our knowledge as to wind speeds,” he said.

“The existing measuring systems are sparse in tropical regions of Australia. Less than two per cent of the peak wind speeds of cyclones making landfall in Australia have crossed where there is a capability of measuring them.

“Previously we’ve had to rely on guestimates, but these transportable anemometers will store data on-board as well as transmitting information every 10 minutes during a weather event.

Each transportable anemometer is mounted on a 3 m tripod and is secured by a concrete anchor or ground screws.