Drusilla Modjeska, one of Australia’s most highly acclaimed non-fiction writers, will deliver the 2013 Colin Roderick Lecture in Townsville on July 30. Drusilla Modjeska, one of Australia’s most highly acclaimed non-fiction writers, will deliver the 2013 Colin Roderick Lecture in Townsville on July 30 and in Cairns on July 31.

In her lecture, titled ‘'Land of unlikeness': Writing about PNG’, Drusilla Modjeska will discuss her move into fiction with The Mountain (Random House 2012), and the challenge of writing about Papua New Guinea.

Born in England, Drusilla Modjeska lived for a number of years in Papua New Guinea before arriving in Australia in 1971.

Her years there, including those as a student at newly established University of Papua New Guinea studying alongside the first generation of PNG writers, intellectuals and politicians, laid the basis for her enduring interest in that country.

The Mountain spans the years 1968-2005, and while it is not autobiographical, it makes use of her time at the university in those years before Independence, as well as recent experiences with the barkcloth artists of Ömie, one of the last living exponents of an art form that once stretched from New Guinea to Hawaii.

Acclaimed for its deft weaving of history with fiction, The Mountain creates a story rich in meanings that are both personal and political, as its characters become caught up in loves, griefs and betrayals that span half a century.

Founded in 1966, the annual Colin Roderick Lecture honours the work of the late Professor Colin Roderick, an enthusiastic champion of Australian literature who became JCU’s Professor of English Literature in 1965.

He created FALS to foster the study of Australian literature. He himself published widely on Australian writers, edited Henry Lawson’s verse, fiction and letters and wrote biographies of Rosa Praed, Lawson, Leichardt and Miles Franklin.

‘Land of Unlikeliness: writing about PNG’

'Land of unlikeness': Writing about PNG

Students and members of the public are warmly welcomed to the lectures. 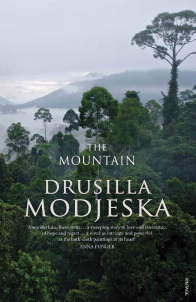