A new website which tracks uncommon fish thanks to the help of boaters, anglers and divers is now up and running in Queensland 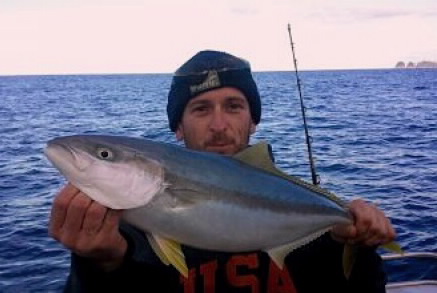 Pictured: A yellowtail kingfish (Seriola lalandi) caught away from its usual range along Tasmania's east coast and logged on Redmap (Photo: Scott Johnston).

A new website that tracks uncommon fish, with help from boaters, anglers and divers, is now up and running in Queensland.

Redmap, or the Range Extension Database and Mapping project, is a website that invites the community to log on to www.redmap.org.au to share their sightings and photographs of marine life not usually found at their local fishing, diving or swimming spot.

Redmap’s community data helps track marine animals that are caught or observed outside their usual range.

JCU’s Associate Professor Marcus Sheaves and research officer Martha Brians of the Estuary and Tidal Wetland Ecosystems Research Group at JCU in Townsville are the regional coordinators for the website and want to find out where marine species are turning up unexpectedly around Queensland.

Ms Brians said anecdotal evidence from fishers and divers had already pointed to some range shifts along the coast.

“We’re hearing about more fish moving away from their usual homes, like the Golden Snapper moving south into southern Queensland waters,” she said.

“As the ‘eyes of the scientists’, boaters, anglers and divers will contribute valuable information to enhance our understanding of how species are responding to long-term environmental changes.”

Ms Brians said Redmap provided a unique opportunity to gather vital information about which species are on the move on a national scale, something that scientists would not be able to do without the help of the community.

“Considering some three to four million Aussies go fishing or diving at least once a year, Redmap will tap into the observations of potentially thousands of citizen scientists,” Ms Brians said.

The Redmap website encourages members to share photos and anecdotes. It also has information and news on fishing, diving and the marine environment.

Redmap QLD is led by JCU in collaboration with the Institute for Marine and Antarctic Studies (IMAS), which hosts Redmap Australia.