An in-depth investigation into improving the efficiency of handling bulk materials has earned a JCU engineering student the annual Charles (CN) Barton Medal. 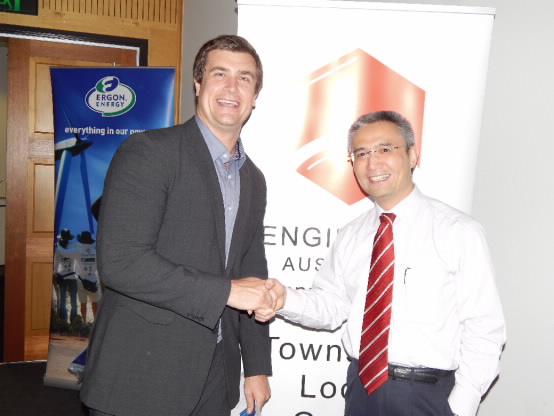 The medal, which is named in honour of an eminent civil engineer in Queensland, is awarded each year to the student who has presented the best fourth year engineering thesis seminar at the School of Engineering & Physical Sciences at JCU.

The award, which was recently held in Townsville, sees the four best thesis presenters from each engineering faculty - one each from mechanical, electrical, chemical and civil engineering - compete.

The winner is selected on performance criteria after presenting their thesis to their own discipline.

Mr Bainbridge said his thesis investigated the effect of dozer blade scale on excavation forces and the feasibility of a scale testing facility to improve design efficiencies.

“Bulk material handling systems such as excavators, hopper or silo storage and transportation including train, road and ships exist locally in a typical coal mine to ship process.

“It is recognised that scaled testing may be a powerful tool in design and could optimise current design methods dramatically, reducing both costs and carbon footprints currently experienced in industry.”

“Using experimental, numerical and empirical techniques, an investigation was conducted to investigate if dozer blade scale and excavation force relationships exist,” he said.

“The aim of my thesis was to explore whether a mathematical relationship could be obtained that would allow small-scale test results to be scaled up. Such relationships could replace the need for full-scale tests currently used in industry.”

Mr Bainbridge said it was known that an approximately cubic relationship between longitudinal excavation force and excavation dimensions existed.

“Experiment results largely match numerical predictions; however, empirical methods were found to be inaccurate,” he said.

“Coal force versus scale relationships are consistent with those found in a parallel study on blade excavation in sand.

“This thesis looked only at a finite dozer blade scale range; however, undeniably, scale relationships in the excavation of coal and sand are present. This shows promise to the concept of using scaled testing as a design tool.

“However, more work is required before the feasibility of a bulk material handling scale testing facility and its position in the design process can be assessed.”

Born in London, in the United Kingdom, Mr Bainbridge’s family moved to Australia when he was two and was raised in North Queensland.

Mr Bainbridge said he was attracted to studying engineering because he was naturally curious.

“I like engineering because when I was younger I was very curious; I was always asking how and why things happen. I like solving problems,” he said.

Mr Bainbridge said of all fields of engineering, he favoured mechanical design and computational mechanics, or modelling.

“I am pretty technical and appreciate the creativity involved in innovative design solutions.”

Mr Bainbridge said he was surprised when his name was announced, as he thought he didn’t give the best presentation on the night.

“I didn’t talk as well as I would have liked and the others did a great job. I thought it would be close. I think I had good technical content and did a lot of work comparatively, but everyone presented well. It was anyone’s game so I guess I was a little surprised.”

For interviews, contact: Thomas Bainbridge on 0424 520 188 or email thomas.bainbridge@my.jcu.edu.au