A James Cook University researcher is calling for greater protection for a critically endangered turtle that’s best known for its ability to breathe through its backside. 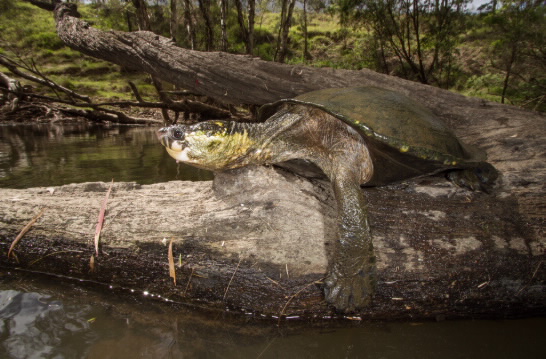 A James Cook University researcher is calling for greater protection for a critically endangered turtle that’s best known for its ability to breathe through its backside.

The white-throated snapping turtle (Elseya albagula) is notable for a number of reasons including its large size (5kg+) and ability to extract oxygen from the water via cloacal respiration ("bum breathing").

JCU’s Jason Schaffer has been studying turtles in Queensland rivers for the last eight years. His focus lately has been on the White-throated turtle in one of their last strongholds, the Connors River.

He said that while they can be quite common in areas of suitable habitat (such as the Connors), it isn’t the case in other areas of their range which includes the Fitzroy, Burnett and Mary River catchments.

Mr Schaffer said that there are very few new recruits into the breeding population due to the nearly 100 percent loss of eggs and young turtles.

“White-throated snapping turtles probably live close to 100 years and don’t start breeding till they are about 20 years old. They thrive in cool, clear, flowing water. This enables them to remain submerged up to days at a time under the right conditions, which is an important part of their survival strategy. Hatchling/juvenile turtles have a higher mortality in the river, coupled with a higher reliance on aquatic respiration, and so are more vulnerable to the degradation of water quality. They are simply not surviving.”

Mr Schaffer said the turtles have been hit by the restriction of movement created by the construction of dams and weirs, sedimentation and erosion from large-scale land use such as agriculture and mining and extreme nest destruction by introduced and native predators.

He said the remaining populations are largely made up of ageing adults. “They can’t get over the weirs in either direction. The major risk for the remaining adult turtles is going over the top of a weir. Their shells crack or shatter on impact and they die.”

Mr Schaffer said he would like to see more nests and intact habitat protected, with riparian strips regenerated in impacted sections to prevent more erosion/runoff and consideration given to the turtles when land and river use is contemplated.

He said the Connors River was to be the site of a new dam but the scheme had been shelved a few years ago. He said there now appeared to be renewed interest in getting the project going again.

“The Connors River is one of the last remaining free flowing sections within the Fitzroy catchment, and there is an important need to conserve the last remnants of this high quality riverine habitat. There are very few places left in the Fitzroy as amazing as this in terms of being intact and clear.”

Mr Schaffer said the threat to the turtles is serious. “They have been declared critically endangered, and if the increased water infrastructure development and drought in northern Australia continues they will continue to get hammered.”