New research has found clownfish larvae can swim up to 400 kilometres in search of a home, which makes them better able to cope with environmental change. 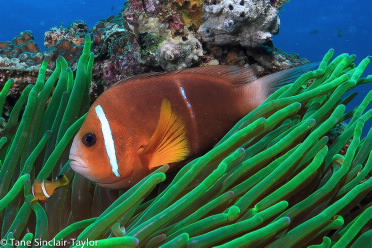 New research has found clownfish larvae can swim up to 400 kilometres in search of a home, which makes them better able to cope with environmental change.

Clownfish spend their entire adult lives under the protection of their host anemone but as babies they must wander the open ocean, says study co-author, Dr Hugo Harrison from the ARC Centre of Excellence for Coral Reef Studies (Coral CoE) at James Cook University.

“In the past we haven’t known where they go, but now we’ve been given a rare glimpse into how far they can swim, crossing large tracts of ocean to find new homes,” he says.

“Knowing how far larvae disperse helps us understand how fish populations can adapt to environmental changes,” Dr Harrison says.  “The further they can swim, the better they can cope.”

As part of the international study, co-author Dr Stephen Simpson from the University of Exeter led a team of researchers to southern Oman, where they collected samples of the only two known populations of the Omani clownfish, Amphiprion omanensis.

“There are only two coral reef systems along this coast and they are separated by 400km of ocean water,” Dr Simpson says.  “In order to persist, fish must be migrating between these two populations.”

The research team collected tissue samples from almost 400 clownfish and used DNA fingerprinting to identify fish that had migrated between the two populations.

“Like the accents that we have that allow us to tell an Englishman from an American, fish populations can develop their own genetic signatures,” says Dr Harrison.

“We can look at the signature of each fish and tell whether it belongs there or not. It’s like finding an Englishman in New York, they stand out.”

The study found the fish were making regular migrations from one population to another and in doing so were travelling across 400 kilometres of open ocean.

“That’s an epic journey for these little dudes.  When they make it back to the reef, they’re only a few millimetres long and they have only a few days to make it there so they must be using ocean currents to assist their migration,” adds Dr Simpson.

The researchers found that most of the fish travelled from North to South, while very few travelled in the opposite direction.

This direction corresponds to the dominant ocean currents in the region, which are driven by the winter monsoon.

Second generation migrants were also present in both populations, which suggests that after completing their dispersal phase, migrants are settling into anemones and surviving long enough to reproduce.

Dr Simpson says it’s the furthest distance they’ve been able to track the dispersal of any coral reef fish and the findings show how connected the marine environment can be.

“The findings change our understanding of marine populations.  They’re not small and separate as we often assume, rather this research shows they’re often vast and inter-connected,” he says.