Turtle ‘hotspots’ to be mapped

JCU scientists have been granted nearly $90,000 by a charitable trust to map sea turtle “high risk hotspots” along the Queensland coast, which will allow environmental managers to focus on areas needing the most attention. 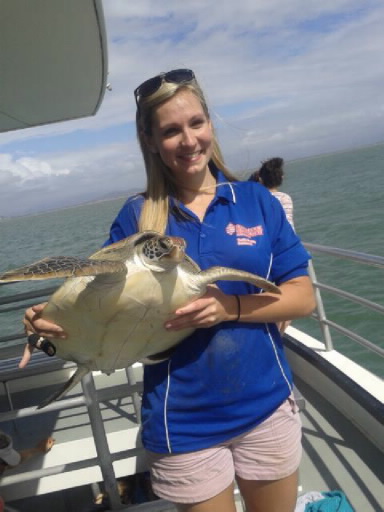 Pictured: Martha Brians, from JCU’s from the Estuary and Coastal Wetland Research Group

JCU scientists have been granted nearly $90,000 by a charitable trust to map sea turtle “high risk hotspots” along the Queensland coast, which will allow environmental managers to focus on areas needing the most attention.

The endangered turtles spend a lot of time in coastal areas feeding and nesting in near-shore habitats that are critical to their survival.

Martha Brians from the Estuary and Coastal Wetland Research Group said when these areas overlap with places humans use, the animals can be severely impacted.

“Turtles nesting on beaches in December may be confused by building lights at night and not find their way back to the water,” said Ms Brians.  “Some turtle feeding and resting zones are near developing urban areas increasing the risk of boat strikes, and many more potential conflicts are still to be identified.”

Ms Brians will create a map of turtle concentrations along the Queensland coast and then add threats such as urban development. This research will pinpoint where the highest risk areas are so that management efforts can be better directed.

She will travel the coast in search of turtle ‘hotspots’ following up information from scientists and volunteer community turtle groups.

The study will produced a precise Geographic Information Systems (GIS) map that shows high risk turtle hotspots that are vulnerable to threats along the QLD coast.

“This information will help managers target their effort on areas where small changes can greatly benefit turtles,” she said.

“Things such as three-hour lights-out periods at night along the beach in December, go-slow zones in certain shallow water seagrass beds, and directing development into low-risk areas could make a huge difference for the sea turtles, with minimal disruption for coastal communities.”

The study is expected to take a year to complete and will involve two separate expeditions north and south of Townsville.