Researchers have found that corals commonly found on the Great Barrier Reef will eat microplastic pollution. 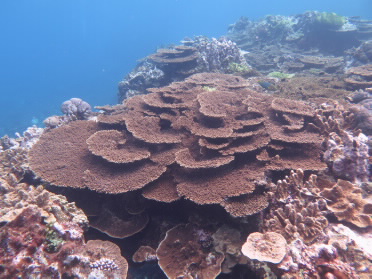 Researchers have found that corals commonly found on the Great Barrier Reef will eat microplastic pollution.

“Corals are non-selective feeders and our results show that they can consume microplastics when the plastics are present in seawater,” says Dr Mia Hoogenboom, a Chief Investigator with the ARC Centre of Excellence for Coral Reef Studies at James Cook University.

Microplastics are tiny fragments of plastic in the environment and are a widespread contaminant in marine ecosystems, particularly in inshore coral reefs.

Despite the proliferation of microplastics, their impact on marine ecosystems is poorly understood.

“Marine plastic pollution is a global problem and microplastics can have negative effects on the health of marine organisms,” says Dr Hoogenboom.

“We aimed to determine whether corals from inshore coral reefs consume microplastics, and whether there is potential for plastic pollution to affect coral reefs.”

As part of the study the researchers put corals collected from the Great Barrier Reef into plastic contaminated water.

After two nights they found that the corals had eaten plastic particles.

“Corals get energy from photosynthesis by symbiotic algae living within their tissues, but they also feed on a variety of other food including zooplankton, sediment and other microscopic organisms that live in seawater,” says study lead author Nora Hall, a James Cook University Masters graduate.

“We found that the corals ate plastic at rates only slightly lower than their normal rate of feeding on marine plankton,” she says.

The plastic was found deep inside the coral polyp wrapped in digestive tissue, raising concerns that it might impede the corals ability to digest its normal food.

The team also sampled the waters adjacent to inshore coral reefs on the Great Barrier Reef.

“During this testing we found microplastics, including polystyrene and polyethylene, although only in small amounts,” says study co-author, Kathryn Berry, a PhD student at James Cook University and the Australian Institute of Marine Science.

The researchers say the next step is to determine the impact plastic has on coral physiology and health, as well as its impact on other marine organisms.

“We are also investigating whether fish on coral reefs eat plastics, and whether plastic consumption influences fish growth and survival,” Dr Hoogenboom says.