An experiment led by scientists from James Cook University has shown that rising sea levels are a threat to the survival of sea turtles. 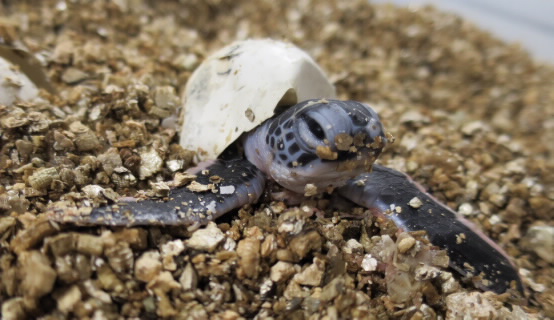 An experiment led by scientists from James Cook University has shown that rising sea levels are a threat to the survival of sea turtles.

Researchers studied eggs from a turtle hatchery on Queensland’s Raine Island exposed to saltwater for different periods of time.

Typically, female turtles lay their eggs in places that remain high and dry so that the eggs can hatch, but rising sea levels and storm surges can overwash nests incubating on the beach.

Eggs that were inundated for one or three hours showed no significant level of mortality, but eggs that were underwater for six hours produced a 40% increase in turtle embryo deaths.

Lead Researcher, Dr David Pike, said it meant that rising sea levels would impact on turtles well before the full effects of climate change were felt in most other places.

“We are trying to anticipate the early effects,” he said.  “In some places it only takes a small rise in sea levels, when combined with a storm or a king tide, to inundate what had previously been secure nesting sites.”

Dr Pike said a big tide or storm surge overwashing buried turtle eggs for up to six hours is a very realistic scenario. “We were actually surprised at how resilient the eggs were,” he said. “We thought after six hours the mortality rate would be higher.”

Dr Pike said short of preventing sea-level changes, direct action could be taken to help prevent turtle eggs from being covered by water.

“People love turtles and it is possible to mobilise large numbers of volunteers to physically move the nests further inshore. We might be able to save them with people power. The Queensland Department of Environment and Heritage Protection has also been out moving sand around the island to provide turtles with higher elevation nesting sites.”

Dr Pike said the larger mystery surrounding the continuing decline of Green Turtles on Raine Island remains to be solved, with inundation by seawater as well as other factors, possibly including high microbial levels and heavy metals in the soil, all probably playing a part.

Contacts: david.pike22@gmail.com (Dr Pike is currently in America, and with the time difference may be slow to respond)