James Cook University scientists have helped invent a clever technique to tell black leopards apart – a trick that may end up saving their skins. 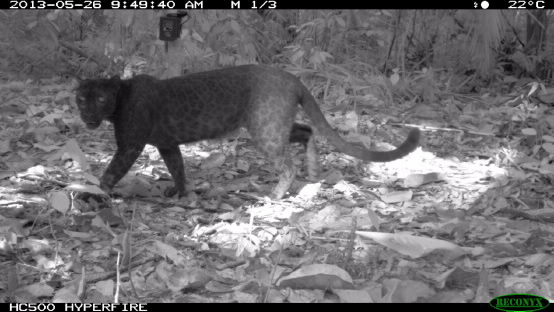 James Cook University scientists have helped invent a clever technique to tell black leopards apart – a trick that may end up saving their skins.

Scientists from JCU in Australia and others have been studying the leopards on the Malay Peninsula – where almost all of the big cats are jet black.

Experts have no idea why the leopards are black and, until recently, could not tell them apart, hindering research and conservation efforts.

But researchers have now devised a simple method to solve the problem by manipulating the mechanism of automatic cameras.

“Most automatic cameras have an infrared flash, but it’s only activated at night”, said Dr Gopalasamy Reuben Clements from JCU. “However, by blocking the camera’s light sensor, we can fool the camera into thinking it’s night even during the day, so it always flashes.”

With the infrared flash firing, the seemingly black leopards suddenly showed complex patterns of spotting.  These spots could be used to distinguish different animals, and help estimate the population size of the species.

The researchers tested this method in the north east of Peninsular Malaysia.  “We found we could accurately identify 94% of the animals,” said Dr Clements, who also works with a local research institute from Universiti Malaysia Terengganu.  “This will allow us to study and monitor this population over time, which is critical for its conservation.”

The researchers want to use their new method to study black leopards in other parts of Peninsular Malaysia where there is abundant prey but few leopards to be seen. It’s thought widespread poaching is to blame.

“Many dead leopards bearing injuries inflicted by wire snares have been discovered in Malaysia,” said Distinguished Professor William Laurance from James Cook University. He said that leopard skins and body parts are increasingly showing up in wildlife trading markets in places such as on the Myanmar-China border.

At the same time, suitable leopard habitats are disappearing faster in Malaysia than perhaps anywhere else in the world, as forests are felled for timber and replaced with oil palm and rubber plantations.

“Understanding how leopards are faring in an increasingly human-dominated world is vital,” said Laurie Hedges from the University of Nottingham – Malaysia, lead author of a study on the cats just published in Journal of Wildlife Management. “This new approach gives us a novel tool to help save this unique and endangered animal.”

Link to research and pics – infrared and standard: http://bit.ly/1Cz6bBs