A new and significant role for marine reserves on the Great Barrier Reef has been revealed, with researchers finding the reserves reduce the prevalence of coral diseases. 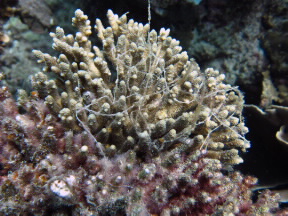 A new and significant role for marine reserves on the Great Barrier Reef has been revealed, with researchers finding the reserves reduce the prevalence of coral diseases.

It’s been known for some time that marine reserves are important for maintaining and enhancing fish stocks, but this is the first time marine reserves have been shown to enhance coral health on the Great Barrier Reef.

Researchers from the ARC Centre of Excellence for Coral Reef Studies at James Cook University found that coral disease levels were four times lower inside no-take marine reserves where fishing is banned, compared to outside reserves.

Wounded corals are more vulnerable to disease. Damaged tissue provides sites where pathogens and parasites can invade, particularly as coral immune responses are lowered while they heal.

Dr Lamb says once a pathogen infects a coral, tissue loss typically spreads from the point of entry.

“It’s like getting gangrene on your foot and there is nothing you can do to stop it from affecting your leg and ultimately your whole body.”

“Disease outbreaks can take a heavy toll, with losses of up to 95 per cent of coral cover on some reefs in the Caribbean.”

Given the difficulty identifying pathogens that cause disease, the researchers say it’s vital to understand which activities increase the risk of coral diseases, and to protect against them.

They say discarded fishing line and levels of coral breakage, potentially from a variety of fishing-related activities outside the no-take zones on the Great Barrier Reef are indicators of the types of activities that contribute to the problem.

The researchers hope their findings send a clear message to reef managers about the benefits of marine reserves for coral health.

“No-take marine reserves are a promising approach for mitigating coral disease in locations where the concentration or intensity of fishing effort is relatively high,” says Professor Garry Russ from the Coral CoE.

Professor Bette Willis, also from the Coral CoE, says the scientists are now expanding their research to examine other drivers of coral disease.

“We’ve shown that there are strong links between damage and disease in this study, now we’re interested in understanding and managing other potential drivers of diseases that involve injury – such as outbreaks of crown-of-thorns starfish, cyclones, and recreational activities like anchoring.”