A fish that can live out of water for up to six days and crawl across dry land is being closely watched by James Cook University scientists as it moves south from PNG towards Australia. 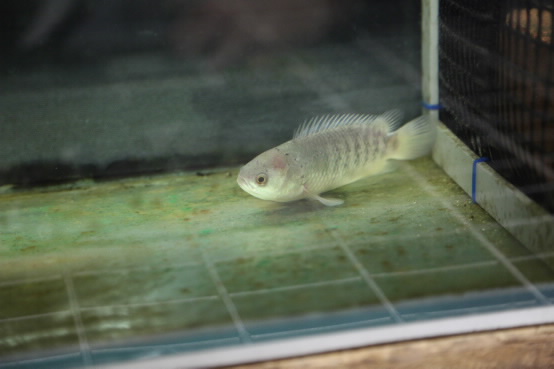 A fish that can live out of water for up to six days and crawl across dry land is being closely watched by James Cook University scientists as it moves south from PNG towards Australia.

JCU scientists have been monitoring the perch’s spread in partnership with rangers from the Torres Strait Regional Authority and Torres Strait communities. Team member Dr Nathan Waltham said it would now prove very difficult to eradicate from the two islands, despite only being first officially recorded there in late 2005.

He said the bad news was there was now evidence the freshwater fish could tolerate exposure to saltwater.  “It does seem to be able to handle a little bit of salt. In our trip up there in December we found it in some hyper saline water holes, so there is some ability to resist exposure.”

The fish drags itself from waterhole to waterhole and is very invasive, outcompeting native species once it is established in a new environment. It is extremely hardy, and has been known to hibernate in the mud of dried-up creek beds for up to six months. It has been witnessed swelling up when swallowed by larger predators, blocking their throats so they either choke or starve.

Dr Waltham said the perch may have come to Boigu and Saibai on a surge of fresh water from flooding rivers in the nearby PNG mainland. But its ability to live in saltwater was a concern, in terms of it moving closer to Cape York and becoming established in mainland Australia. “But I still think the chances of it getting to Australia by swimming are quite low,” said Dr Waltham. “There is more chance it will arrive in the bottom of a fishing boat or as discarded live-bait fish.”

Herbert Warusam, a Ranger on Saibai Island, said the community was very thankful for the work JCU are doing to help bring awareness about the effects of Climbing Perch. “We are now actively monitoring Climbing Perch in our wetlands and educating local fisherman to report sightings. It is important we don’t let them travel beyond our Island,” he said

JCU researchers are nevertheless measuring the animal’s ability to withstand salinity and temperature and examining how fast it can move across different types of terrain. “It’s only through active education and monitoring, in partnership with relevant authorities and local communities, that we can keep it under control. If we do it early enough,” said Dr Waltham.