Scientists have discovered that rising ocean temperatures slow the development of baby fish around the equator, raising concerns about the impact of global warming on fish and fisheries in the tropics. 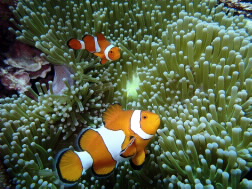 Scientists have discovered that rising ocean temperatures slow the development of baby fish around the equator, raising concerns about the impact of global warming on fish and fisheries in the tropics.

In the largest study of its kind, researchers from the ARC Centre of Excellence for Coral Reef Studies at James Cook University examined the impact of increasing water temperature on fish larvae.

They analysed fishes collected from over two thousand kilometres of ocean, from the sub-tropical southern Great Barrier Reef to northern Papua New Guinea, close to the equator.

“We found that where ocean temperatures warmed beyond a certain point as we neared the equator, at about 29 degrees, the pace of larval development slowed,” says study lead author, Dr Ian McLeod.

Most marine fish go through a larval development stage in the open ocean when they are more vulnerable to predators.

Dr McLeod says the longer larvae remain in this stage the less likely they are to survive.

“Faster growth during the larval stage should lead to a survival advantage because they can develop sooner and get out of the dangerous pelagic environment faster,” he says.

"These populations may be particularly vulnerable to global warming,” Professor Munday says.

To analyse the early life history of the fish, the researchers studied their otoliths, or ear stones, which are put down in layers similar to tree rings as the fish develop.

“It’s like reading their diary, we can learn about their growth rates, how long they take to develop, we can even calculate their size when they settled back on the reef, ” says Dr McLeod.

Professor Geoffrey Jones, also from the Coral CoE, adds that the findings are a concern for the millions of people living around the equator who depend on fishing for food and their livelihoods.

“Many people in equatorial regions such as Papua New Guinea rely of fish as their main source of protein, so these results raise concerns about future food security in these places.”