Two dozen of the world’s top ecologists say that Earth’s ecosystems are suffering “terrifying effects” from habitat fragmentation, in an article just published in Science Express. 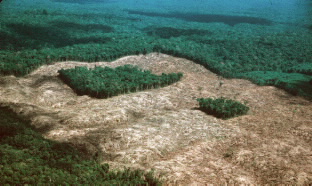 Two forest fragments from the world's largest and longest-running experimental study of habitat fragmentation, the Biological Dynamics of Forest Fragments Project in central Amazonia, near

Two dozen of the world’s top ecologists say that Earth’s ecosystems are suffering “terrifying effects” from habitat fragmentation, in an article just published in Science Express.

“The numbers are simply scary, in terms of the pace and extent that ecosystems are being fragmented today,” said Professor William Laurance of James Cook University in Cairns, Australia, one of the study’s co-authors.

Over the past three decades, Prof Laurance has studied the ecological effects of fragmentation in every major tropical region in the world.

“One of the biggest threats to fragmented ecosystems is ‘edge effects’—physical and biological changes associated with the abrupt, artificial borders of fragments,” said Prof Laurance.

The study’s lead author, Professor Nick Haddad from North Carolina State University in the USA, said “Seventy percent of the world’s forests are now within a half-mile of a forest edge, and twenty percent within a football field of an edge.”

“And even those great forests are under assault,” said Prof Laurance. “For example, loggers have bulldozed more than 50,000 kilometers of new roads into the Congo since the year 2000. As a result, the forests have been invaded by poachers with modern weapons, who have killed off two-thirds of the world’s forest elephants for their valuable ivory tusks.”

“Roads are really the biggest danger,” said Prof Laurance. “Once a road cuts into a forest, we often see an influx of illegal colonists, loggers, poachers and miners, especially in developing nations where the rule of law is often limited.”

“In the Amazon, 95 percent of all deforestation occurs within five kilometers of a road,” said Prof Laurance. “If we’re going to preserve parts of wild nature for future generations, we just have to keep the roads out.”