James Cook University scientists have played a role in a discovery that may alter the known history of humankind.

JCU’s Professor Paul Dirks and Dr Eric Roberts were part of a team that explored the Rising Star Cave system in South Africa. 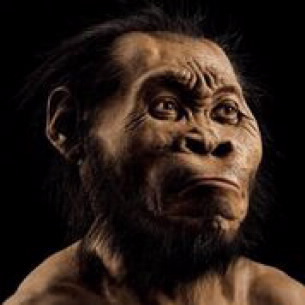 A chamber deep in the caves was found to contain multiple specimens of what is being called Homo naledi – an extinct, previously unknown species related to modern homosapiens.

Testing at JCU and the University of Johannesburg shows sediments in the chamber did not come from external sources, ruling out the possibility of flash flooding or other catastrophic events leading to the fossils getting into the chamber.

Professor Dirks said the remains were found at the end of a narrow passage in a section where sunlight never reaches, known to scientists as the ‘dark zone’. A newly-released paper co-authored by the pair attempts to throw light on the discovery (link below).

“Nothing is certain at this early stage, but a lot of the evidence points to the chamber being a potential deliberate body disposal site,” said Professor Dirks.

Professor Dirks said the features of Homo naledi are similar to other early hominids, combining a human-like face, feet and hands, but with a short, ape-like torso and a very small brain.

“It is a mixture of primitive features and evolved features. It shows there were different species of hominids alive at different times that combined all sorts of different features. Nature was experimenting.”

The scientists said only a small part of the cave has been excavated and there are hundreds, if not thousands, more bones in the cache, making it a unique and valuable site. The site is also unusual for its lack of any other large vertebrate bones except those of Homo naledi.

“Discoveries are often made of single bones or single jaws and teeth. But so far the team has removed 1500 bones from the Rising Star system from almost every part of the skeleton. It’s a goldmine, it will play a key role in telling the story of human ancestry,” said Dr Roberts.

Access to the final chamber is gained by dropping into a narrow 20cm-wide gap in the rock.

“You crawl several hundred metres into the cave system through some very narrow squeezes,” said Dr Roberts. “Then that final drop into the chamber is very intimidating. It requires a technical rock climb and you hyperventilate a bit going down.”

Scientists believe there has never been an alternative, easier route into the chamber.

The cave system is now under the care of the University of Witwatersrand.

Study of the site will likely continue for decades.

Additional support for the geological analysis and context of the fossil site and sediments were provided by the Australian Research Council, James Cook University and the University of Johannesburg.