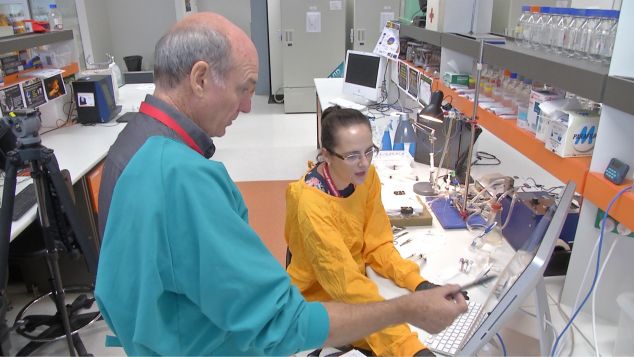 Imagine the following scenario. You are leading your team on patrol in pursuit of enemy insurgents and trigger a booby-trap. The explosion is massive. You hit the ground hard with both legs blown off.  After the dust and smoke clears, help arrives. The medic sees your body rapidly bleeding out as you go into shock and notices a gaping hole in your abdomen. The new enemy is time.

Tourniquets in Iraq and Afghanistan have saved thousands of lives by stopping major bleeding from extremities such as arms or legs. However, there are few options when it comes to preventing abdominal blood loss caused by penetrating foreign objects, gunshots or explosive fragments.

In those conflicts it’s estimated over 1100 deaths were deemed potentially survivable, and the majority were from internal blood loss and occurred within the first hour of injury. In addition, there are many thousands of innocent lives lost from terrorist attacks and urban warfare due to internal hemorrhage.

JCU scientists, Prof Geoffrey Dobson and Hayley Letson of the College of Medicine & Dentistry, and Australian Institute of Health and Tropical Medicine (AITHM), have teamed up with the US military to solve this major problem. US Special Operations Command (SOCOM) has granted the project US $ 532,349 so the pair can continue their work.

The latest tests show the scientists have developed a potentially revolutionary drug therapy that treats shock and acts like a “pharmacological tourniquet” by dramatically reducing internal blood loss by up to 60%, which has the potential to save countless lives.

The stabilisation fluid, consisting of adenosine, lidocaine and magnesium, is known as ALM. The JCU team have shown a single small IV bolus of ALM over 60 minutes followed by a 4 hour stabilisation ‘drip’ resulted in a 60% reduction of internal blood loss and increased survival.

“The ALM fluid is administered intravenously and circulates around the body, kick-starts the heart, gently raises blood pressure, protects the heart, brain and organs, and slows bleeding by plugging up the leaks,” Dr Dobson said.

“It is not a foam or synthetic compound like that those used to plug a flat tyre, it is a therapeutic drug that protects the body and stops the blood from thinning, allowing it to rapidly form a viable clot and reduce bleeding.”

Currently, many combatants die before they reach a medical facility.

“The uniqueness of our ALM fluid is its small-volume and ability to protect the whole body at the point-of-injury, as part of a knife-edge balancing act between life and death,” Dr Dobson said.

“It resuscitates the body after haemorrhagic shock, plugs the holes, reduces inflammation, protects the vital organs, including the brain, and reduces infection. It is all about providing the combat medic with a new way to buy time on the battlefield,” he said.

“Only time will tell if we have raised the bar high enough to improve survivability in these austere environments where currently no effective treatment exists,” Dr Dobson said.

Link: To pictures and video of Dr Dobson and Hayley Letson at work: bit.ly/1pGpJhT