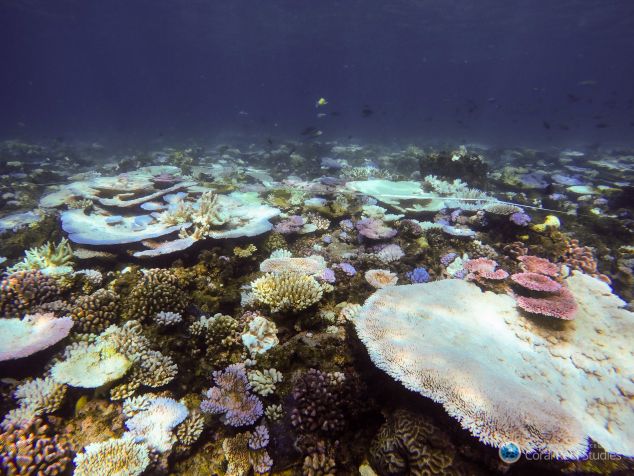 After months of careful planning, 300 Australian coral reef researchers have launched a small flotilla of research vessels, each one filled to the gills with highly trained experts. Their tightly coordinated mission is a race against time – to document coral bleaching along the 1000km-long top half of the Great Barrier Reef before more of the heavily bleached corals die.

“So far we have collectively undertaken 12 separate missions using research vessels, and by the end of this month we will have examined close to 90 reefs that have also been surveyed from the air,” says Prof. Morgan Pratchett, from the ARC Centre of Excellence for Coral Reef Studies.

“Unfortunately, our underwater surveys are also revealing very high levels of bleaching from Cairns to Torres Straits. Last week, our research divers found that 75% of the corals were bleached on multiple reefs near Port Douglas, and nearly 50% near Cairns. South of Cairns thankfully has closer to 10-30% bleaching”.

These amounts, measured and recorded by video underwater, match very closely with the broader aerial surveys of more than 750 reefs also being conducted by the National Coral Bleaching Taskforce.

Dr Neal Cantin, Research Scientist at the Australian Institute of Marine Science, is surveying mildly bleached reefs this week, north of Townsville. “When bleaching is mild, the corals can regain their colour as water temperatures drop, and most of them will survive. Our coral experts have the skills to measure how different species are responding – some are susceptible and others are robust”.

But it’s a different story further north, where many reefs are heavily bleached.

“On reefs and sites around Lizard Island, bleaching has approached 80-100%, and many corals are already dying,” says Dr Anne Hoggett, co-Director of Australian Museum’s Lizard Island Research Station. “This is by far the worst bleaching crisis we’ve seen, eclipsing the 2002 event.”

The researchers have found a silver lining though. “The bleaching measured both from the air and from underwater is very patchy, with some reefs and portions of reefs escaping the worst impacts,” says Prof. Pratchett.

Coral bleaching occurs when abnormal environmental conditions, like heightened sea temperatures cause corals to expel tiny photosynthetic algae, called ‘zooxanthellae’. The loss of these colourful algae causes the corals to turn white, and ‘bleach’. Bleached corals can recover if the temperature drops and zooxanthellae are able to recolonise them, otherwise the coral may die.

The National Coral Bleaching Taskforce is designed to co-ordinate research effort among Australia’s marine science community in the event of a mass bleaching event in Australia. The taskforce draws together 10 research institutions across Australia to co-ordinate the efforts of over 300 scientists.