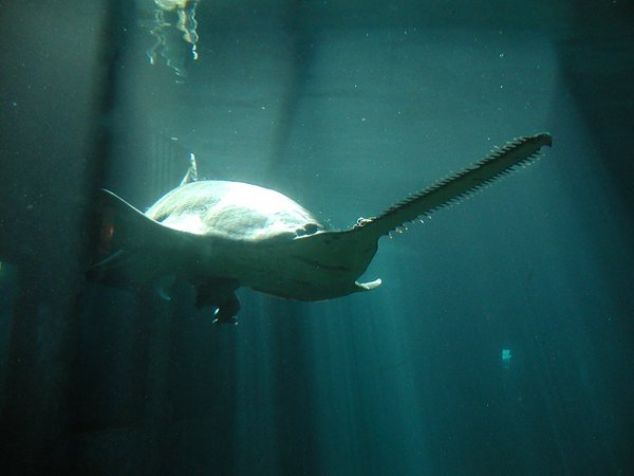 Scientists can now reliably predict which bodies of water contain the endangered and elusive sawfish species – by conducting a simple test.

eDNA sampling involves collecting a small sample of the water and analysing it for traces of the DNA of a target species. It has been made possible by huge advances in the field of DNA collection and analysis and is considered a revolutionary technology in the natural sciences.

JCU’s Professor Colin Simpfendorfer said researchers first sampled water from different aquaria and were able to correctly tell which contained largetooth sawfish, before trying the technique in the wild.

Researchers say largetooth sawfish may now be extinct in 50 countries, with northern Australia one of the last places where they can be reliably found.

Traditional methods to search for sawfish, such as fishing surveys, can be expensive and time-consuming. To test the approach in the wild, the research team sampled known largetooth sawfish habitats in the Daly River, Northern Territory.

The team partnered with Malak Malak Traditional Owners and Indigenous rangers. “With plenty of sawfish habitat, Malak Malak country was the perfect place to test the new tool in the field,” says Dr Peter Kyne of CDU.

Professor Simpfendorfer said the technique was mostly accurate in waterholes but to date disappointing in flowing rivers. “It’s not a big problem, this is very much a trial phase and it will be solved quite easily given some more time.”

He said the eDNA techniques were rapidly evolving and were a huge advance for species conservation. “Sawfish are globally distributed and we don’t even know if they still exist in many countries. Applying the eDNA approach globally will enable us to rapidly find threatened populations and prioritise their protection.”

Professor Simpfendorfer said the eDNA technique was not limited to fresh water or conservation applications. “There is a big push to roll it out globally. It has many other potential uses, such as detecting invasive pest species at ports.”

He said within five to ten years it’s hoped that all eDNA analysis will be able to be completed in the field, with no need to take samples back to the lab.

The research project was funded in part by the Australian Government’s National Environmental Research Program.

For one-time use only with this media release. Not for re-use or archiving. Please credit if marked.