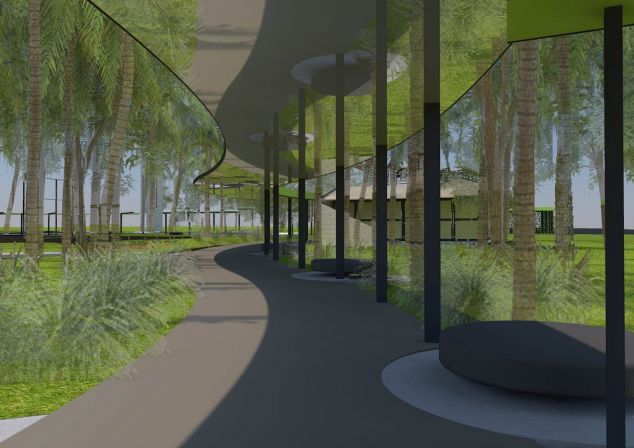 JCU has brought forward by several months the construction of its $4m Verandah Walk project on the Townsville campus to create jobs and stimulate the local economy.

The covered walkway will provide all weather, undercover access to many of the University’s key academic buildings.

It will also create a series of “nodal” meeting and seating areas that will allow students to study, collaborate and socialise in a landscaped outdoor setting.

An invitation for Expressions of Interest for the construction project has been advertised and locally-based contractors are strongly encouraged to apply.

Artist impressions of the project can be found at the following link: Verandah Walk images

Deputy Vice Chancellor, Services and Resources, Tricia Brand says JCU is a key part of the Townsville community and its economy, and it wants to do what it can to help the city at a time of need.

“We hope that by bringing forward this project, and hopefully others, we can provide a timely boost for Townsville’s economy.”

JCU is examining other projects that can also be expedited to boost local employment. It’s planning to bring forward several other smaller projects with a combined value of up to $4m.

The University is also planning a number of larger projects with further details to be announced in 2016.

JCU is one of the biggest employers in the region, and already has two large construction projects underway in Townsville - The Science Place ($83M project) and AITHM ($31M project).

Both projects are injecting tens of millions of dollars into Townsville’s economy and, at their peak, provide - directly and indirectly - hundreds of local jobs.