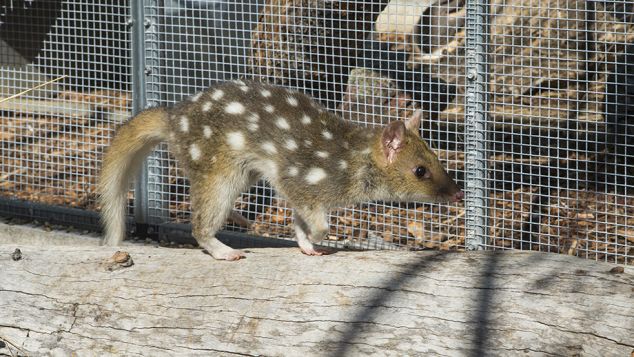 A senior James Cook University academic is helping catch eastern quolls in Tasmania as part of a project to bring the animal back to the mainland after more than 60 years of extinction.

Professor Iain Gordon, JCU’s Deputy Vice-Chancellor, Division of Tropical Environments and Societies, said the animals will be released into the Mulligans Flat woodland sanctuary near Canberra.

“These first individuals will form part of a long term project to restore the native small mammal community that used to thrive in this area,” he said.

Quolls were once widespread in south-eastern Australia, but were wiped out by introduced foxes and cats, disease, habitat loss and human intervention. Tasmania is now the only place the animal can be found in the wild.

Professor Gordon said Australia holds the dubious honour of having lost many of its small mammal species from the mainland since European settlement. “We’ve been involved in restoring many species into a protected area in the ACT; now it’s time to reintroduce the quoll, a small predator that is in effect at the top of the food chain, when cats and foxes are kept at bay.”

Eastern quolls were last seen in the Sydney region in 1956. They have not been seen in the Canberra region for 80 years.

Professor Adrian Manning from the Australian National University’s Fenner School of Environment and Society said it was the first such translocation of wild eastern quolls on the Australian mainland.

“Our aim is not just to establish a healthy and diverse population of eastern quolls but also to undertake critical research to understand the best way to introduce the species to improve success in future reintroductions on the mainland,” he said.

The quolls are fitted with radio-tracking collars to allow researchers to do regular health checks and monitor their breeding and habitat requirements.

The eastern quoll reintroduction is part of a $1.8 million Australian Research Council Linkage Project Bringing back biodiversity - a research partnership between the ACT Government, ANU, CSIRO and James Cook University.

The Tasmanian Department of Primary Industry, Parks, Water and the Environment and the Mt Rothwell Biodiversity Interpretation Centre are major partners in the translocation project. The Mulligans Flat Woodland Sanctuary is managed in partnership between the ACT Government and the Woodland and Wetland Trust.