A James Cook University researcher is developing a device to detect parasites in farm water before it makes fish sick. 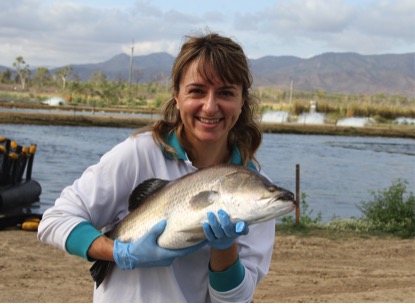 The awards, which were announced during the ABARES Outlook 2016 conference dinner in Canberra, encourage young scientists and researchers to pursue innovative projects that help keep Australia’s rural industries sustainable and profitable.

Ms Gomes is developing a device to be used by fish farmers for the early detection of waterborne pathogens and to prevent disease outbreaks.

“Aquaculture is the fastest growing agribusiness on the planet, worth more than US $100 billion a year. However, about 40 per cent of the world aquaculture production is lost due to disease outbreaks,” she said.

“I strongly believe that prevention is better than cure. This device will improve the response capability of fish farmers to manage disease risks.”

Ms Gomes said the $44,000 award ($22,000 for the Fisheries Research and Development Corporation

award and $22,000 for the overall Minister’s award) will help her develop and test the device on farms.

“A DNA-based point-of-care (PoCT) digital device will detect and quantify the genetic material - in this case fish parasites - using a low cost, portable and simple technology.

“Traditional diagnostic methods can take several weeks to provide results; by then it is too late for farmers to implement the appropriate management response to outbreaks.”

The device will detect both freshwater (Ichthyophthirius multifiliis) and saltwater (Cryptocaryon irritans)ciliate parasites, which cause fish White Spot disease.

Ms Gomes said PoCT technologies have been extensively researched and used in human medicine particularly for the detection of diseases in remote areas.

“Aquaculture farms generally are located in remote areas which makes this kind of technology ideal to be used in farms.

“Having this early detection tool on farm will accelerate farmers’ response to possible fish infections, and reduce consequent economic loss.”

Ms Gomes said in the first instance, it would be tested in farmed barramundi.

“But once the technology has been developed, then it will be possible to detect pathogens from many other aquaculture species.”

Ms Gomes hopes to have a prototype to be tested on farms within the next three years.