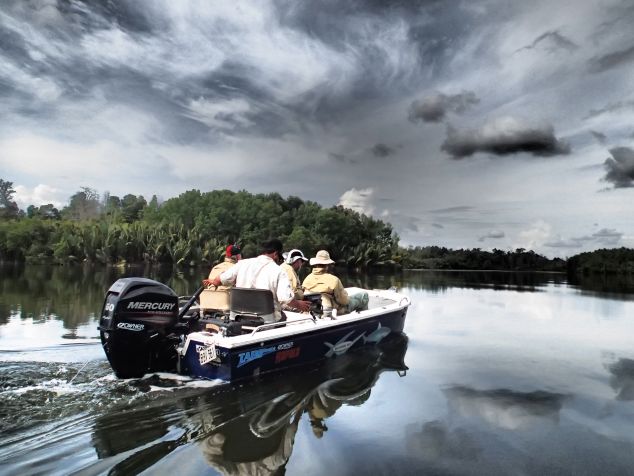 The Sportfishing for Sustainable Livelihoods Research Hub builds on a landmark research collaboration between NFA, JCU and ACIAR that has worked to develop PNG's iconic Papuan Black Bass sportfishery into a sustainable livelihood solution.

In recognition of the key role of NFA in sportfishing development in the region the Hub was launched at an event in Port Moresby, Papua New Guinea last night.

The opening of the hub builds on years of research led by a multidisciplinary team from NFA, JCU and ACIAR that looked at everything from the ecology of hard-fighting sportfish to how a sport fishing industry might be designed so that it benefits people who live near the fishing grounds.

JCU’s Professor Marcus Sheaves, the project’s leader, said the hub is a flagship for a larger vision that taps into JCU’s research excellence to have real impact on the livelihoods of people throughout the tropics. “The sportfishing for sustainable livelihoods project is about how we take lessons we’ve learned and extend them to improving the livelihoods of people throughout the region who have few alternative sources of income,” he said.

The people living near remote fisheries habitats are often impoverished, but retain effective control over their fisheries.

Professor Sheaves said one of the hub’s first jobs would be to capture more financial support to extend the work pioneered by the NFA/JCU/ACIAR collaboration.

“At the moment the sportfishing for sustainable livelihoods project is supported by JCU, NFA and ACIAR but we want to be outward looking and develop partnerships further.”

Professor Sheaves said the hub staff were meeting with Indigenous groups in Australia who were investigating similar ventures in northern Australia.

Link to background story, pictures and video of the black bass project: http://bit.ly/1Sb0wYo

(Please note: Pictures and video are for one-time only use with this release and are not available for re-use or archiving. Please include provided photographer credits).