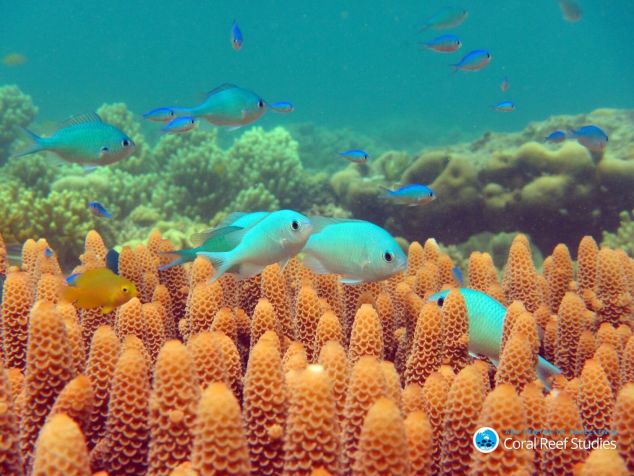 Ocean warming is occurring at such a rapid rate that fish are searching for cooler waters to call home.

A team of international scientists led by the ARC Centre of Excellence for Coral Reef Studies at James Cook University conducted an experiment with coral reef fish from Lizard Island on the Great Barrier Reef, to see how they respond to climate change.

“We exposed groups of blue-green damselfish (Chromis viridis) to five different temperatures between 23 and 33 degrees during the 27 week period,” says Dr Jodie Rummer.

“One fish from each group was then placed inside two adjoining tanks where the water temperature can rise and fall. The fish were pretty smart. When it got too hot or cold they moved to the other side,” she says.

“Overall, they favoured 29°C which was also the best temperature for a healthy metabolic rate. Anything higher than that and the fish needed 2-3 times more energy to cope.”

“Fish that were restricted to 33°C lost 30% of their body weight and some of them died,” says lead author Adam Habary.

The results show there’s another option for fish other than adapting to rapid ocean warming. Being stressed is a strong motivator for fish to move to more favourable conditions. But if they relocate, there could be serious implications for tropical fish populations.

“Coral reef fish from the northern part of the Great Barrier Reef may need to move hundreds of kilometres south, further away from the Equator if temperatures continue to rise,” says Rummer.

“We know that fish have a long evolutionary history of adapting to changing conditions, but right now the climate is changing at a rate faster than has ever been documented in human history.

“If fish lack flexibility in how their body responds to elevated temperatures and can’t genetically adapt at a rate that keeps pace with how fast the climate is changing…then we have to expect them to move or die.

“Increases in ocean temperatures could change coral reef biodiversity forever, meaning that the Great Barrier Reef as we know it today, could be very different in the future,” she says.

The paper Adapt, move or die – how will tropical coral reef fishes cope with ocean warming has been published in the journal Global Change Biology.