Time nearly up for tiny frog 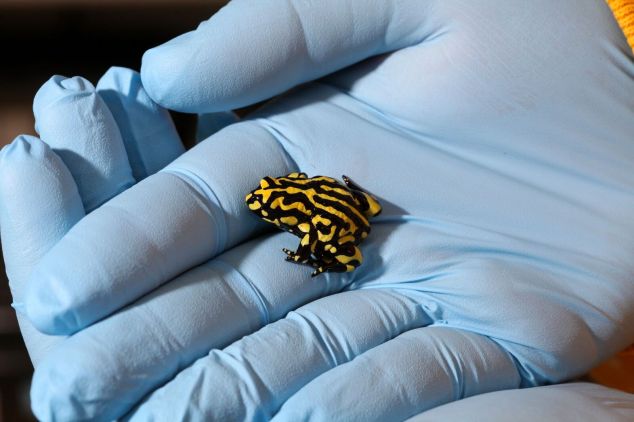 A crowd-funding attempt by James Cook University scientists aims to save the critically endangered Corroboree frog from the brink of extinction.

“The fungus can’t be eradicated from the wild so we want to identify those individual frogs that are naturally immune to the fungus and selectively breed them,” she said.

The Amphibian Chytrid fungus (Batrachochytrium dendrobatidis) has already caused the extinction of six Australian frog species, and a further seven species are at immediate risk.

Senior research fellow Dr Lee Berger said the Corroboree frog has been hit hard, with less than a dozen surviving in the wild. “The good news is we know there are some individuals that seem to be more resistant to the fungus.”

JCU scientists from the One Health Research Group plan to identify the genetic factors that enable these individuals to survive the fungus attack and the use this information to selectively breed animals with better immunity in partnership with the Taronga and Melbourne Zoos.

They have raised $3240 as of Monday and need another $1260 by Thursday to cover the cost of genetic testing. If they do not meet their goals the money already pledged will be returned to donors.

“Our results will be relevant not just to the other six Australian frog species on the brink of extinction, but to hundreds of amphibians worldwide,” said Dr Kosch.

The team has a crowd funding page to cover the costs of the genetic screening.