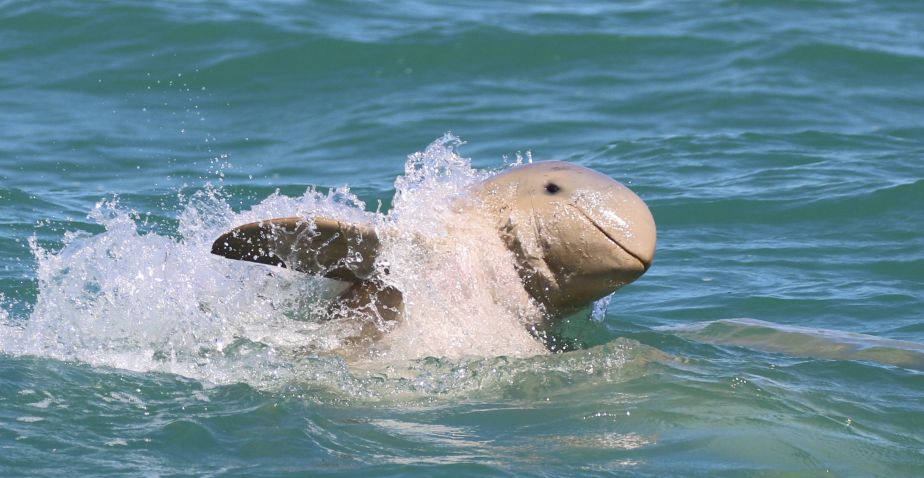 A James Cook University researcher’s discovery of rare Australian snubfin and humpback dolphins in Papua New Guinea has led to the official recognition of the area’s conservation significance.

The Kikori Delta in PNG has been designated an Important Marine Mammal Area (IMMA) based on research conducted by JCU’s Dr Isabel Beasley. This means the area is now officially recognised as important for biodiversity and ecosystem health and will be taken into account in future conservation planning.

“The research identified small populations of the Australian snubfin and Australian humpback dolphin in the Kikori Delta. These species are not currently found elsewhere in the Pacific Islands,” she said.

On the strength of the discovery, the International Union for the Conservation of Nature announced the Kikori Delta IMMA as one of 18 new IMMAs in the Pacific Region. The Bismarck Sea is the other IMMA announced for PNG.

Vagi Rei from CEPA’s PNG Marine Program said the organisation promotes the conservation initiative and the significance of the area.

“We’re very pleased to have supported a collaborative research project that has identified the international importance of two marine mammal areas in Papua New Guinea waters,” he said.

Dr Beasley said the JCU project discovered that the Australian snubfin dolphin had previously been mistaken for another species.

“This was a significant discovery, as the snubfin dolphin is only currently found in northern Australia,” she said.

Jim Anamiato from the PNG National Museum and Art Gallery said they are very proud of their collaborative project with JCU that discovered the Kikori snubfin dolphin.

“It was a remarkable achievement, confirmation of the presence of this species has highlighted the Kikori Delta’s conservation importance, which has now been supported by the IMMA designation.”

ExxonMobil PNG Limited has supported this research project since 2014. Additional funding of AUD $375,000 has supported a scholarship program for three PNG students to conduct their postgraduate studies on marine mammals.

The University of PNG’s Acting Vice-Chancellor, Professor Vincent Malaibe said the university is fully supportive of projects that help to preserve wildlife and any endangered species.

“Sustainability of our marine environment should be of paramount concern to all parties, including scientists, conservationists, and developers of our resources,” he said.

James Cook University will continue research in the Kikori Delta, and will now expand to areas of the Bismarck Sea in collaboration with its PNG partners.

The IUCN Marine Mammal Protected Areas Task Force has announced the approval of 18 Important Marine Mammal Areas (IMMAs) in the Pacific Islands – two of which are located in Papua New Guinea: the Kikori Delta and Bismarck Sea. The Bismarck Sea IMMA resulted from research conducted by CEPA and Dr Cara Miller (University of New England, Australia) around Manus Island. A link to the announcement can be found here.

Erich Hoyt, Co-chair IUCN Marine Mammal Protected Areas Task Force and Research Fellow, Whale and Dolphin Conservation: “We hope that by bringing together experts from across the Pacific Islands to engage in the IMMA process that this will provide a good scientific basis, as well as more impetus, for marine habitat conservation measures in the region.”