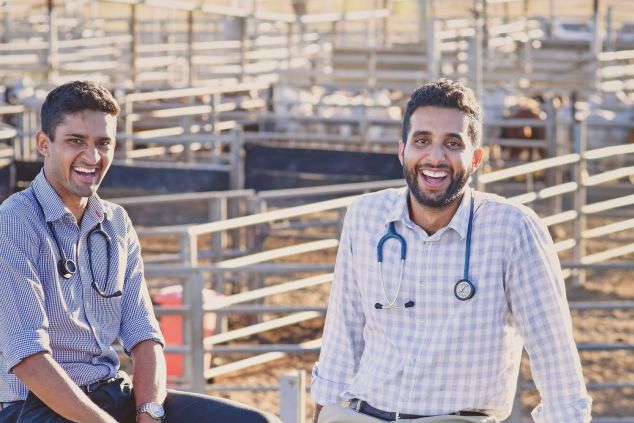 This year, the University is training 593 GP registrars through the provision of its specialist training program, Generalist Medical Training (GMT).  This program has been contracted by the Australian Government Department of Health to deliver Australian General Practice training (AGPT) in North Western Queensland.

“We have a regional mission with a focus on the needs of rural, remote and underserved communities, tropical medicine and the health of Aboriginal peoples and Torres Strait Islanders.

“In the 2005 to 2016 JCU Medicine Graduate Survey, 84% of students said they intended to practice medicine outside of capital cities, compared to the national average of 16%.

“We are now seeing the follow through of those intentions with 92% of GMT registrars placed in regional, rural and remote areas, according to the Australian Statistical Geography Standard – Remoteness Area index.”

Steven Bajwa is a sixth year medical student at JCU in Cairns. He said he is looking forward to a career in a rural hospital.

“Being from Brisbane when I started my degree, I always envisaged I would return or work in another tertiary centre (metropolitan hospital),” he said.

“The degree and placement from JCU have completely changed my perspective on my graduate location. I no longer want to work in tertiary centres, but in smaller more rural hospitals.”

Cloncurry registrar Dr Cameron Hoare said it was his JCU medical degree that set him on the rural career path.

After his first medical student placement in the rural town, Dr Hoare returned in his sixth year of medicine, and then again later to undertake GP training with JCU’s GMT.

He applauded the GMT program, saying it strongly encourages doctors to take up rural and remote posts.

“GMT definitely has an advantage there that they are providing registrar training and trying to support registrars training out west, which is actually a great success.”

Mackay GP and GMT Medical Educator, Dr Ciara Ross is also a JCU medical school graduate. She said it set her up for a career in rural practice.

“I liked that their focus of the medical degree was more in rural and remote medicine, which was where I ultimately wanted to end up, working in more of a rural community,” she said.

She said the program is attracting more people who, like her, genuinely want to stay in rural areas.

“I’ve had quite a number of registrars come to me who live in Mackay and want to stay in Mackay, worried that they could potentially be moved. I am quite happy to be able to reassure them that if Mackay is the place they want to be, then generally they can stay here.”

“There is a new generation of doctors coming through who are really interested in remote medicine and want to work in regional hospitals. I think maybe in years gone by, the epitome of medicine was working in a tertiary centre (metropolitan hospital), but I think people are genuinely chasing these rural jobs now because they are a bit different and exciting.“

Dr Ross encouraged anyone considering becoming a GP to study with JCU and GMT.

“I would recommend GMT for GP registrar training because they offer good quality and supportive education in a variety of training posts with experienced supervisors.

“Because GMT was developed by JCU, they have the staff and resources of a university with experience in post graduate education, so you know you will be in good hands.

“The program also prepares registrars well to face the college exams, with lots of practice throughout the program and additional support.”

JCU will now look to expand upon its success in the provision of General Practice Training via additional funding from the Australian Government (Regional Training Hubs Funding). This funding will allow JCU to further build and connect regional specialist training pathways across Queensland.