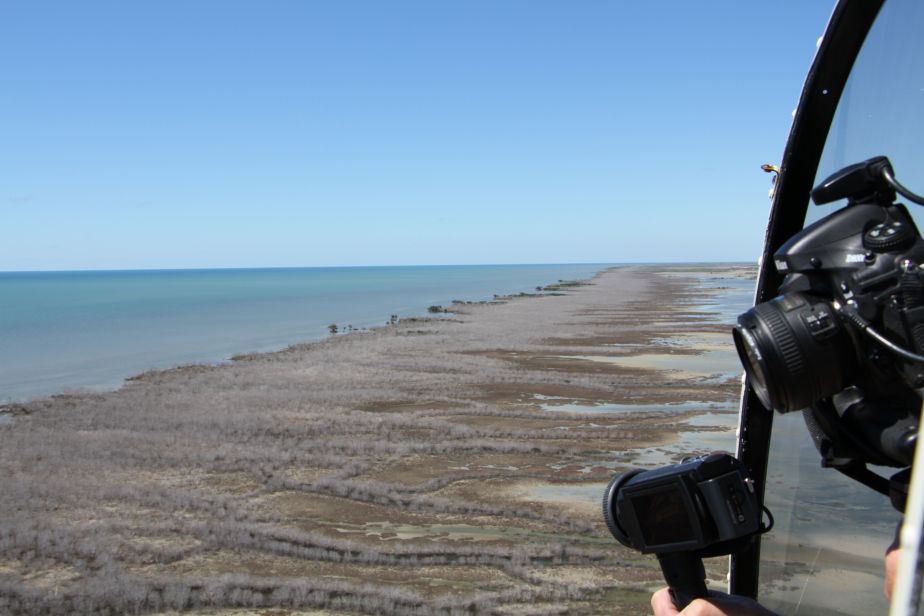 Mangrove dieback in the Gulf of Carpentaria in 2015

A James Cook University scientist will investigate an enormous dieback of mangrove forests in the Gulf of Carpentaria, two years after the unprecedented environmental event.

From the ground, air and water, Dr Duke and his team will survey the 7400 hectares of damaged mangrove areas along 2000 kilometres of Gulf coastline from Weipa to Gove – an area that in late 2015 experienced the largest natural dieback of mangroves ever recorded.

“We’re going to provide a survey, description and complete baseline analysis of the extent and patterns of the dieback across the entire impacted area and comparative neighbouring areas,” Dr Duke said.

He said that while the coastline had experienced below-average rainfalls in recent years and extremely high temperatures, the cause appears more to do with a temporary 20cm drop in sea level recorded during the latter months of 2015. Mangroves were left high and dry in upper zone areas and starved of the usual flooding high tides.

“The area is so sparsely populated, it was only passing fishermen and scientists conducting unrelated work who first noticed the dieback, some five months after it began,” said Dr Duke.

Since then, significant steps have been taken to train and equip dedicated Aboriginal Ranger groups along the impacted southern Gulf shorelines, using methods promoted by the MangroveWatch program.

“The idea is to better inform and build capacity amongst these passionate locals so they can more effectively record and document impacts and changes in their coastal country. The partnership with JCU scientists will promote regular shoreline monitoring so future dramatic impacts will no longer go unnoticed,” he said.

“So the relative dominance of climate influences in this region is of critical interest to world observers of environmental responses to climate change.”

Dr Duke said in addition to investigating the state of the mangroves two years on from the dieback, the project will fine-tune mangrove assessment and monitoring methods, and provide recommendations for recovery, potential intervention, future monitoring, and predictive studies.

The aerial surveys will begin in early December this year.

This work is being supported through the Northern Australia Environmental Resources Hub, the Tropical Water Quality Hub, the Marine Biodiversity Hub, and the Earth Systems and Climate Change Hub.

Images and video from the original dieback here.