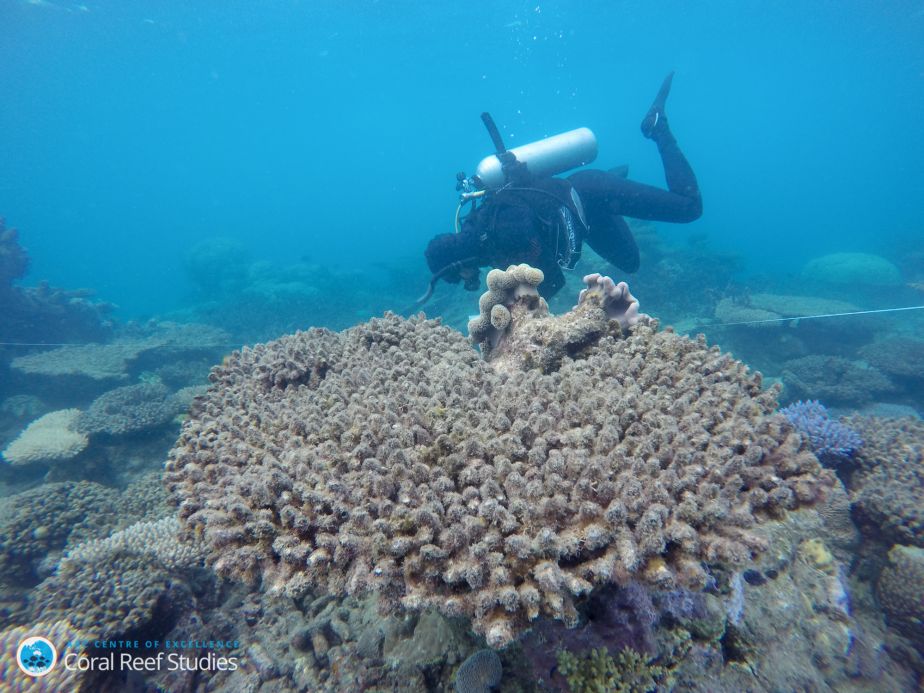 A researcher from the ARC Centre for Coral Reef Studies surveys the bleached/dead corals at Zenith Reef in the northern section of the Great Barrier Reef, November 2016. Image: Andreas Dietzel

The world’s reefs are under siege from global warming, according to a novel study published today in the prestigious journal Science.

For the first time, an international team of researchers has measured the escalating rate of coral bleaching at locations throughout the tropics over the past four decades. The study documents a dramatic shortening of the gap between pairs of bleaching events, threatening the future existence of these iconic ecosystems and the livelihoods of many millions of people.

"The time between bleaching events at each location has diminished five-fold in the past 3-4 decades, from once every 25-30 years in the early 1980s to an average of just once every six years since 2010," says lead author Prof Terry Hughes, Director of the ARC Centre of Excellence for Coral Reef Studies (Coral CoE).

"Before the 1980s, mass bleaching of corals was unheard of, even during strong El Niño conditions, but now repeated bouts of regional-scale bleaching and mass mortality of corals has become the new normal around the world as temperatures continue to rise."

The study establishes a transition from a period before the 1980s when bleaching only occurred locally, to an intermediate stage in the 1980s and 1990s when mass bleaching was first recorded during warmer than average El Niño conditions, and finally to the current era when climate-driven bleaching is now occurring throughout ENSO (El Niño-Southern Oscillation) cycles.

The researchers show that tropical sea temperatures are warmer today during cooler than average La Niña conditions than they were 40 years ago during El Niño periods.

“Coral bleaching is a stress response caused by exposure of coral reefs to elevated ocean temperatures. When bleaching is severe and prolonged, many of the corals die. It takes at least a decade to replace even the fastest-growing species," explained co-author Prof Andrew Baird of Coral CoE.

“Reefs have entered a distinctive human-dominated era – the Anthropocene,” said co-author, Dr C. Mark Eakin of the National Oceanic & Atmospheric Administration, USA. "The climate has warmed rapidly in the past 50 years, first making El Niños dangerous for corals, and now we're seeing the emergence of bleaching in every hot summer."

"For example, the Great Barrier Reef has now bleached four times since 1998, including for the first time during back-to-back events in 2016 and 2017, causing unprecedented damage," explained Prof Hughes.

"Yet the Australian government continues to support fossil fuels."

"We hope our stark results will help spur on the stronger action needed to reduce greenhouse gases in Australia, the United States and elsewhere," says Prof Hughes.

The paper “Spatial and temporal patterns of mass bleaching of corals in the Anthropocene” will be available after the embargo lifts here.

Images must carry credits as listed in Dropbox folder here