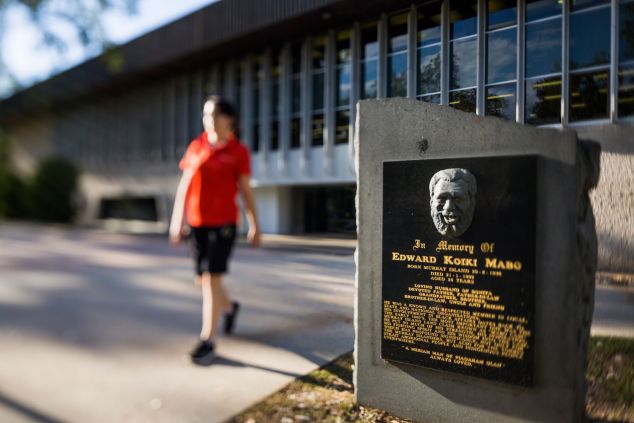 James Cook University is celebrating ten years since the naming of the Eddie Koiki Mabo Library.

The Townsville campus library was named in honour of Eddie Koiki Mabo on 21 May 2008.

At the time, JCU Vice Chancellor, Professor Sandra Harding noted that the naming of the library will “forever commemorate the link between the man who changed the land laws in Australia and James Cook University.”

Mr Mabo was one of the most important historical figures to have spent time at the University. Employed at JCU as a groundsman, he was also a student, guest lecturer, and colleague and friend of JCU staff and students.

It was during his time as an employee at JCU that Mr Mabo spent many hours reading, studying and researching law and land rights in the library that is now named after him.

To mark the anniversary each year, JCU Library and Information Services endeavours to hold an Indigenous art exhibition to coincide with the naming anniversary, as well as National Sorry Day (26 May), National Reconciliation Week (27 May to 3 June), and Mabo Day (3 June). The first anniversary was celebrated with an exhibition by his daughter, Gail Mabo.

This year, for the 10thanniversary, the exhibition is welcoming back previous artists to showcase their past and current work and will feature Gail Mabo, Tommy Pau, Teho Ropeyarn, Sharon Banjo, Aicey Zaro and Susan Peters Nampitjin. Over the past ten years, artworks by each of the artists has been purchased for the James Cook University Art Collection to commemorate this important occasion.

Gail Mabo has expressed her thanks to all those involved with the exhibition as celebrations for the 10th anniversary unfold.

“On behalf of the Mabo family I would like to wish all the artists involved a great big thank you for taking time to be a part of this, the 10thanniversary of the renaming of the library in honour of a man who stood up for the rights of Indigenous Australia,” she said.

“We would like to take this opportunity to say thank you to the James Cook University staff at the Eddie Koiki Mabo library lead by Helen Hooper for their hard work over the years to making all of these exhibitions possible.”

The exhibition has opened and will run until 15 June at the Eddie Koiki Mabo Library.