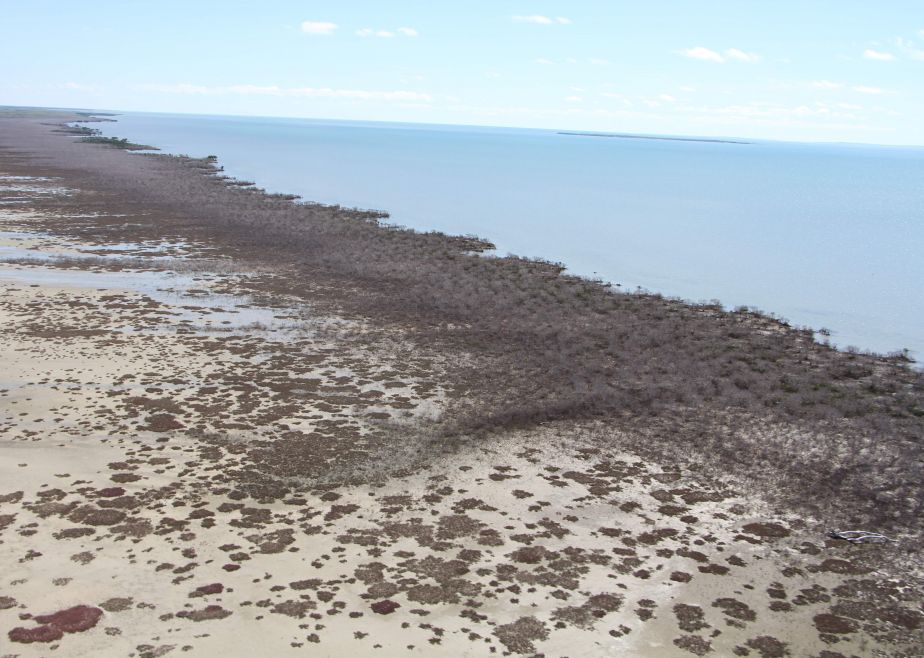 Mangrove dieback in the Gulf of Carpentaria.

James Cook University scientists investigating an unprecedented mangrove dieback in the Gulf of Carpentaria three years ago are surveying the area to see how well it has recovered – and the early signs aren’t good.

The JCU team has joined forces with fellow experts from Charles Darwin University (CDU) and the Northern Territory Government to perform field surveys in the aftermath of the 2015-2016 dieback event.

Dr Duke says that while more than 1500 kilometres of shoreline were impacted and more than 8000 hectares of mangrove trees were lost with this event, the effects varied in different places from around 100% losses to approximately 10-20% damage.

“The aim is to quantify the difference in impacts as well as the extent of the recovery three years on,” he said.

These studies will focus on the Northern Territory side of the Gulf. Earlier studies led by Dr Duke on the Queensland side of the Gulf in August this year did not show promising results for the area.

“While there has been limited resprouting with seedling establishment and regrowth, the recovery looks like it’s being overwhelmed by erosion combined with physical scouring by masses of drift logs and branches from dead mangroves. Each high tide, dead material scrapes across the seedlings, breaking and killing them.”

Dr Duke said scientists were reasonably sure of the cause of the mangrove dieback in 2015-16.

“From 2011 the coastline had experienced below average rainfalls and the 2015-16 drought was particularly severe. Secondly, the temperatures in the area were at record levels and thirdly, some mangroves were left high and dry as the sea level dropped about 20cm during a particularly strong El Nino.”

Dr Duke says this was enough to produce what scientists regard as the largest recorded incident of its kind, and the worst instance of likely climate-related dieback of mangroves ever reported.

“Essentially, they died of thirst,” he said.

Dr Duke said this was the same El Nino event that caused the unusually hot seas responsible for severe coral bleaching in northern areas of the Great Barrier Reef in early 2016.

Professor Lindsay Hutley from CDU said that as scientific experts in the field, the team was committed to learning more about this significant event – “the where, the why, and what do we do about it.”

The studies are funded by the NT Government and the Australian Government’s National Environmental Science Program.

The surveys will be conducted in close collaboration with locally-based li-Anthawirriyarra Sea Ranger Unit of the Mabunji Aboriginal Resource Indigenous Corporation.

(All images and video are provided for use in conjunction with this press release only. They are not available for archiving, re-use or re-sale).