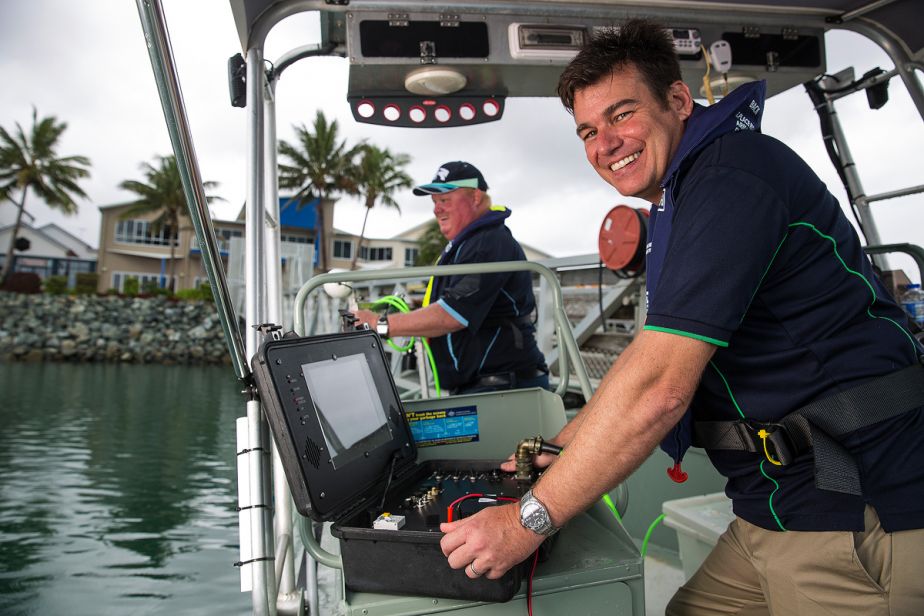 James Cook University has won a prestigious award for helping safeguard the environment near Queensland ports.

A team including JCU’s Centre for Tropical Water and Aquatic Ecosystem Research (TropWATER) has picked up a Business Higher Education Round Table (BHERT) award for an Outstanding Collaboration for National Benefit.

JCU’s Dr Nathan Waltham said the program has been formally running since 2017, building on JCU’s 25 years of work in the area.  “We monitor water, seagrass and coral at the ports of Mackay, Hay Point and Abbot Point, as well as water and seagrass quality at the Port of Weipa in the Gulf of Carpentaria.  What’s especially notable is that three of the ports are adjacent to the Great Barrier Reef World Heritage Area, so the monitoring has to be absolutely stringent,” he said.

Dr Waltham said the scientists provide the ports’ operator, North Queensland Bulk Ports, (NQBP), with independent environmental data collected in a scientifically rigorous manner. “We watch what happens to water quality at 18 separate points, and check on seagrass at 23 meadows. We also monitor six different sites to keep an eye on the coral,” he said.

Dr Michael Rasheed, Principal Research Scientist at TropWATER, said the award was a great achievement and highlights the importance and value of working closely with industry partners.  “Not only have we been working in partnership with this industry group in Queensland for many years, but we have been able to create a platform for undergraduate students to work directly with NQBP staff, which means graduating students are more job ready than ever,” he said.

JCU Vice Chancellor Professor Sandra Harding said: “The award is testament to the TropWATER team’s outstanding work and reflects our university’s strong focus and commitment to working in partnership with industry, providing real world marine science solutions to meet some of the challenges and realise some of the opportunities presented in the tropics.”

NQBP CEO Nicolas Fertin said the integrated marine monitoring program with TropWATER was a crucial part of their environmental work.  “It demonstrates NQBP’s commitment, not only as stewards of the Great Barrier Reef World Heritage Area, but also as active contributors to its research and development.

“The partnership also sets an example to the maritime industry around the world of how well-managed ports and critical coastal habitats can coexist,” he said.

BHERT CEO Dr Peter Binks praised the winning program, saying that the judges particularly liked the fact it used the skills of the different partners to create joint solutions for one of Australia’s most important natural resources. “We noted the critical marine habitat information supplied by JCU is integrated early in NQBP’s processes and has resulted in some fundamental changes to help minimise the impacts of port operations in the Great Barrier Reef World Heritage Area,” he said.

The Mackay-Whitsunday Healthy Rivers to Reef Partnership (HR2P) extended congratulations to JCU for recognition of their work with NQBP in collecting the vitally important data, which is used in HR2RP’s annual waterway health report card, alongside multiple other marine data sets to report a holistic picture of waterway health in the region.

The Partnership’s Executive Officer Charlie Morgan said: “It’s great to see JCU recognised via this prestigious award for their hard work. We firmly believe a partnership approach from all sectors including academia and industry is the key to providing comprehensive waterway health information for such a complex system such as the Great Barrier Reef and its adjacent catchments.”