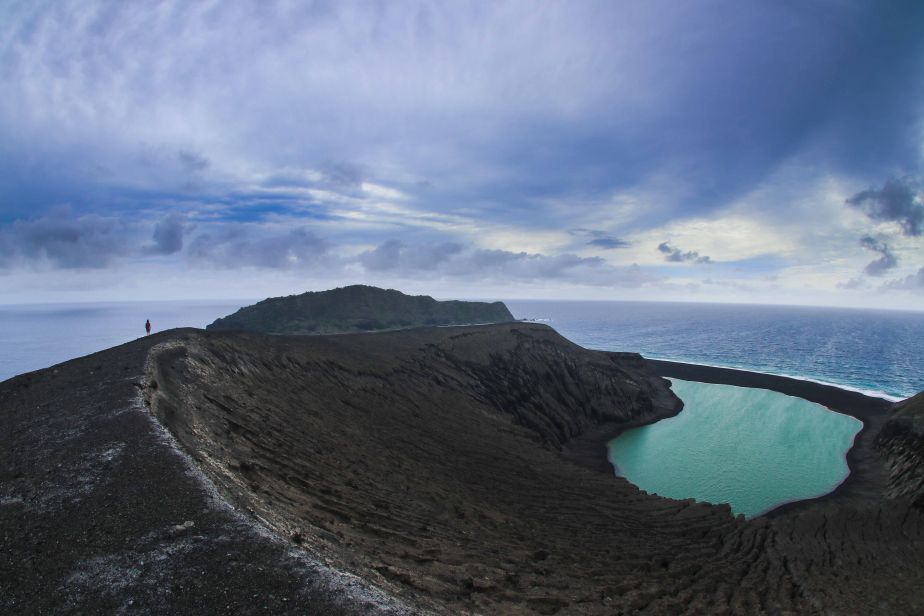 A volcanic eruption has created a new island in the South Pacific Ocean.

Scientists say coral reefs on a tiny island in the South Pacific have shown incredible resilience and recovery from a recent but very severe disturbance: a volcanic eruption that created a new island.

Hunga Tonga - Hunga Ha’apai was (until October this year) the newest island on Earth. It was a result of a massive 2015 volcanic eruption in the middle of the South Pacific that, over a period of two weeks, created a new island more than 200 metres high.

Lead author Patrick Smallhorn-West is a PhD candidate at the ARC Centre of Excellence for Coral Reef Studies at James Cook University (Coral CoE at JCU) and a National Geographic Explorer. He and a team of scientists surveyed the effects of the eruption on the coral reefs around the island.

“Coral reefs are increasingly compromised by multiple stressors, even in the most remote locations,” Mr Smallhorn-West said.

“While severe disturbances, such as volcanic eruptions, can annihilate entire reef ecosystems, they can also provide unique opportunities to examine ecosystem resilience and recovery.”

“We wanted to see what happens to a coral reef when it experiences the worst of the worst. Not much is as bad as a massive volcanic eruption, short of things such as nuclear testing at places like Bikini Atoll. This event allowed us to document not only how reefs were affected by a massive disturbance, but also how they recovered.”

Co-author Dr Tom Bridge, also from Coral CoE at JCU and the Queensland Museum, says the reefs were surveyed not only to examine the effects of the eruption, but also to understand how new reefs began forming on the new habitat.

The team also included researchers from the NASA Goddard Space Institute who helped piece together the environmental conditions that were present at the time of the eruption.

Dr Jim Garvin, chief scientist from the NASA Goddard Space Flight Centre, explained that large ash clouds from the eruption collapsed into a ground-hugging flow that released massive sediment plumes into the ocean. This was confirmed by scans of rock samples collected from the island and by satellite imagery. The latter showed high sea temperatures around the eruption.

“Some parts of the reef were totally annihilated by the blast,” Dr Bridge said. “They were completely destroyed with huge chunks of reef turned over—you could still see dead coral species in-situ but covered in black sediment, and often upside down.”

“However, one section of the island—shielded by a pre-existing island and prevailing weather conditions—still supported diverse coral reefs.”

“Here we found high cover and diversity of corals, including many large mature coral colonies. This was a well-established reef system that had clearly persisted through the eruption largely unaffected.”

The small area that survived appears to have provided a source of larvae to repopulate reefs around the rest of the island.

“This is evidenced by the large number of juvenile corals that covered the substrate at many locations,” Mr Smallhorn-West said.

“Some of the uplifted land had also made brand new habitat for reef formation, and there was very high recruitment of specific fast-growing species in these areas—all very young and beginning to lay the foundations of a new reef.

“Fish showed a similar pattern, with all the large fish persisting at the one site, and plenty of juveniles now living in the areas that were either annihilated or uplifted by the blast.”

The study suggests that the remote location and lack of additional stressors, such as human activity, have likely contributed to the resilience of these reefs.

“In the absence of chronic man-made stressors such as poor water quality and overfishing, coral reefs can be resilient to one of the largest physical disturbances on Earth,” Mr Smallhorn-West said.

Dr Bridge said natural disasters like these were once the largest catastrophes on Earth, and showed that reefs can recover from severe acute disturbances. However, the key to recovery was the persistence of adult corals and fish in the small area unaffected by the blast.

“Reefs are facing disturbance events at unprecedented spatial scales; for example, the bleaching event on the Great Barrier Reef in 2016 affected huge areas with few refuges available. Therefore, recovery of the hardest hit areas will take decades if it occurs at all,” Dr Bridge said.

“Small and protected populations can be crucial for recovery from severe disturbances in marine as well as terrestrial ecosystems—but recovery is likely to decline as the frequency and severity of man-made disturbances continues to increase.”

IMAGES: Images are available for media use with this story only and with credit as marked to the photographer.