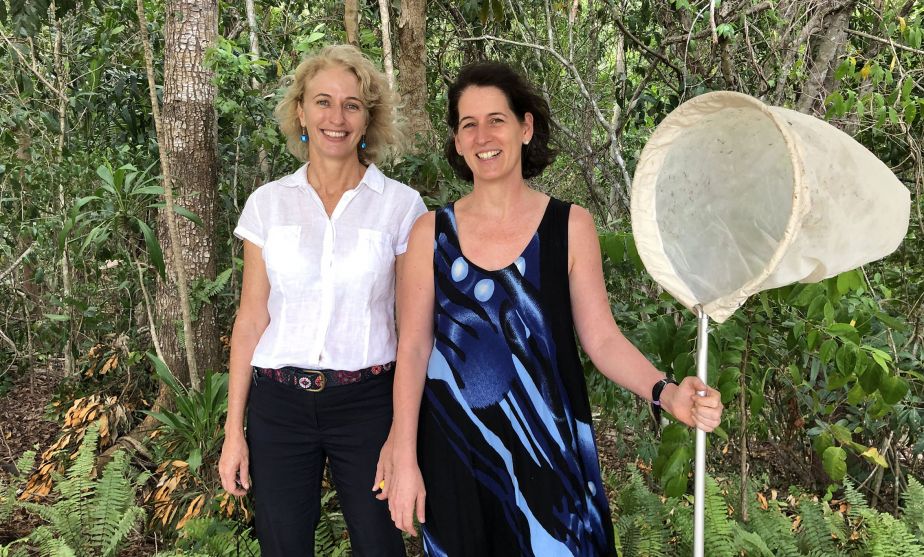 Insects that attack vulnerable rainforest trees will face close scrutiny over the next three years, thanks to a $395,000 Discovery grant from the Australian Research Council (ARC).

The research grew out of the Daintree Drought Experiment, an ARC-funded study led by Associate Professor Laurance, a rainforest ecologist. Since 2015, this study has monitored almost half a hectare of rainforest that has been subjected to an artificial drought.

“The most striking observation to date is a sharp increase in insect attack and disease on affected plants, and that’s something we want to investigate further,” Associate Professor Laurance said.

“Data on a subset of shrub and sapling species suggest that when rainforest trees are drought-stressed, attacks by their natural enemies increase dramatically.”

The drought experiment has also shown significantly lower rates of photosynthesis in saplings in the experiment, compared to nearby matched controls.

“This grant will enable me to collaborate with two eminent entomologists with expert knowledge of the rainforest insects of the Wet Tropics. It also means we can add a post-doctoral researcher to our team in Cairns, and train and supervise new PhD students, helping to launch new careers in science,” Associate Professor Laurance said.

“Together, we’ll explore how plant defences are affected by drought and which type of insects are most likely to take advantage of plants as their health declines.”

Associate Professor Lori Lach said the research would contribute to general understanding of the insects of the wet tropics rainforests, as well as their likely impact in changing conditions.

“Insects underpin almost any land-based natural system, but they’re so often overlooked. They really are the little creatures that run the world,” she said.

“This is an exciting project because it’s a chance to build on our knowledge of how insects and plants interact in the world’s oldest rainforest.”

Associate Professor Laurance said the research project would add to our understanding of how the forests of Australia’s wet tropics are likely to respond to our changing climate. “It will also add to knowledge of the potential challenges facing rainforests across the global tropical zone,” she said.

This project was among almost $285M in research funding announced recently by Minister for Education Dan Tehan.

About the Daintree drought experiment:

The drought experiment aims to extend the dry season, which rainforests normally experience, from three months to six months.  This is the predicted change that researchers expect to see in many of the world’s tropical forests in response to climate change.  “At the experiment’s end we will remove the plastic sheeting and monitor the trees’ future growth,” Associate Professor Laurance said.

This large-scale drought experiment, installed in 2015 at JCU’s Daintree Rainforest Observatory, is a global first. It incorporates JCU’s 47-metre canopy crane, which provides access to plant life-forms at all vertical levels of the rainforest.

In two experimental plots clear-panel roofing structures capture and remove rainfall, creating an artificial drought. Over time these trees are compared with matched control trees nearby in the forest.

“A greater understanding of drought in the rainforest will have potential applications for the management of protected areas, forestry reserves and agricultural lands in the tropics,” Associate Professor Susan Laurance said.

“From an environmental perspective, Australia’s rainforests are irreplaceable, providing unparalleled biodiversity. Their direct value for tourism is estimated at around $500 million per year, and their cultural importance to the Indigenous peoples of the Wet Tropics is immeasurable.”

You can see the Daintree drought experiment on JCU’s YouTube channel.