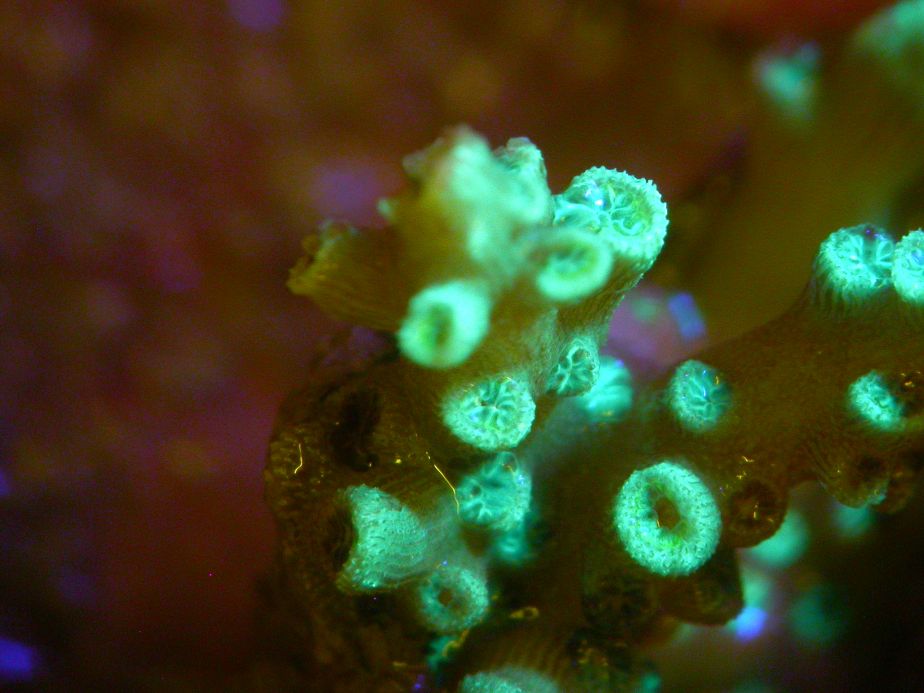 Under some light conditions many corals emit a green fluorescence that attracts the symbionts necessary for a healthy life. Image: Andrew Baird.

New research shows corals emit an enticing fluorescent green light that attracts the mobile microalgae, known as Symbiodinium, critical to the establishment of a healthy partnership.

The study, led by researchers at the ARC Centre of Excellence for Coral Reef Studies (Coral CoE) at James Cook University and Japan’s National Institute for Basic Biology, sheds new light on the mechanism that brings corals and Symbiodinium together – for example, following a bleaching episode.

“Following the back-to-back mass bleaching events, images of bleached white coral contrasted with healthy, vibrantly coloured coral were widespread. The key difference between the two is the abundance of Symbiodinum in the coral’s tissue. Without sufficient Symbiodinum, which provide corals with nutrients via photosynthesis, the coral will starve.”

“Thirty percent of corals receive their Symbiodinium from their parents, the other seventy percent, need a different mechanism,” said co-author Prof Andrew Baird of Coral CoE

“But what brings the two organisms together? Corals are stationary creatures, however Symbiodinium can move freely through the water column.”

The study reveals that corals have evolved a cunning plan to draw the Symbiodinium to them.

The researchers used the chalice coral, Echinophyllia aspera, to test whether the green fluorescent light emitted by corals under certain conditions can signal the Symbiodinium in the water column to move towards them: a process known as ‘positive phototaxis’.

The paper “Green fluorescence from cnidarian hosts attracts symbiotic algae” is published in the journal Proceedings of the National Academy of Sciences.