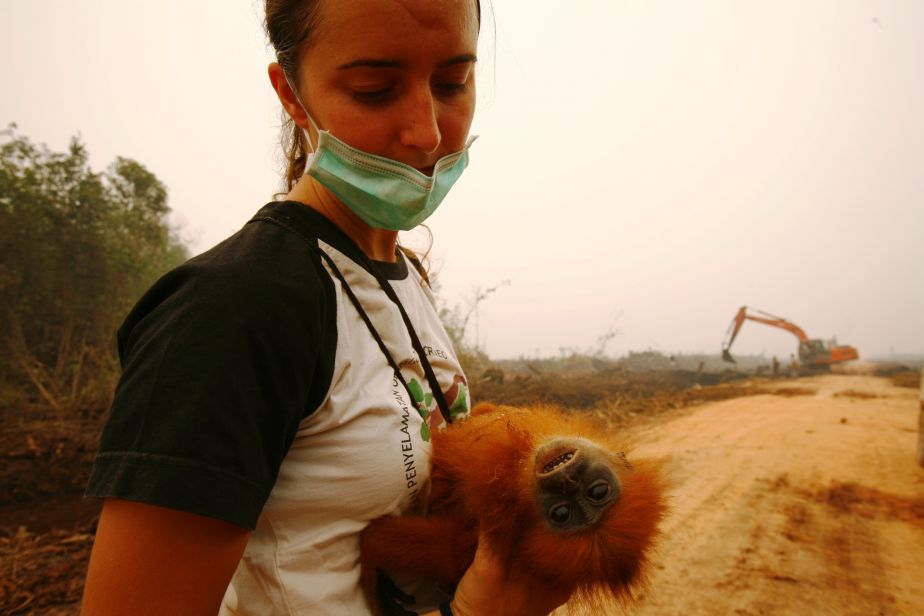 An injured leaf-monkey dies in the arms of a wildlife volunteer in an eastern Borneo oil palm plantation. Image: © Tantyo-Bangun.

An ambitious road-building spree by the Indonesian government will fragment and destroy vast areas of tropical rainforests on the island of Borneo, according to an international research team.

“You’d be hard-pressed to identify a scarier threat to biodiversity anywhere on Earth,” said Dr Mohammed Alamgir from James Cook University in Australia, lead author of the study.

“Borneo’s forests and rare wildlife have already been hit hard, but planned roads and railways will shred much of what remains, slicing across the largest remaining forest blocks,” said Professor Jatna Supriatna of the University of Indonesia.

The authors say their results are especially worrisome because Indonesian Borneo is one of the world’s largest tracts of native tropical forest, currently spanning 37 million hectares (93 million acres).

The roads are part of an ambitious plan by the Indonesian government to expand infrastructure such as roads and railways in order to accelerate logging, mining, oil palm plantations and other forms of development in Borneo.

“For wide-ranging species such as an elephant or orangutan, this is the worst possible news,” said Professor William Laurance from James Cook University, leader of the research team.  “To find food and shelter, these species have to move to survive.”

Professor Laurance and his colleagues used satellite images and computer models to estimate the impacts of the road and rail network across Indonesian Borneo, a region known as Kalimantan.  Their research was published in the journal Scientific Reports.

They found the roads would reduce “forest connectivity”—the degree to which forest cover is spatially linked together — sharply, by 34 percent in total.

“That’s an alarming figure,” said Dr Alamgir.  “And it’s just the tip of the iceberg, because the new roads and rail projects will open up the forest like a flayed fish, allowing illegal colonists, poachers and miners to invade the forest and cause even more forest disruption.”

The scientists said that in addition, the new projects will slice through 42 national parks and protected areas, making them far more vulnerable to illegal poachers.  Some parks in Borneo are already devoid of wildlife because of severe poaching.

“We’ve identified the worst projects in terms of disrupting forests,” said Professor Laurance. “They include border roads in the provinces of West, East and North Kalimantan, new Trans-Kalimantan roads, and freeways and rail lines in East Kalimantan.”

“These projects will be like daggers in the heart of the Borneo rainforest,” said Dr Alamgir. “We implore the Indonesian government to reconsider them, because they’ll open a Pandora’s box of crises for the world’s biologically richest forests.”

For free photos and copy of the article: