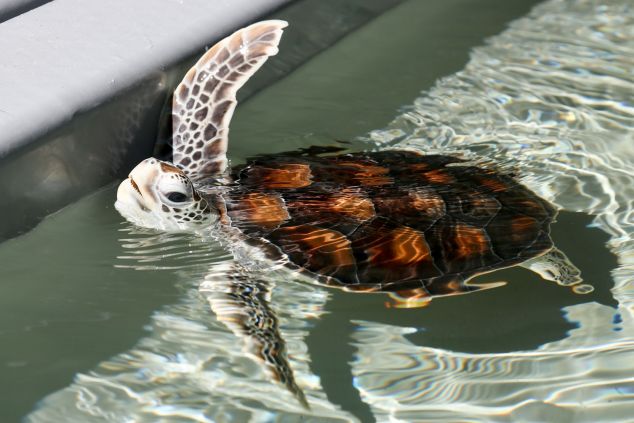 A world-first study at James Cook University has found an alternative to antibiotics for treating bacterial infections in green sea turtles.

Researchers at the JCU Turtle Health Research Facility have conducted a first-of-its-kind study using what’s known as phage therapy as an option for bacterial infections in green sea turtles.

“Green turtles rely on ‘good bacteria’ in their gut to extract nutrients from food,” said Dr Robert Kinobe, one of the researchers involved in the study.

“This creates a challenge when it comes to treating bacterial infections because if we administer antibiotics, it can destroy the ‘good bacteria’ and make the turtle’s health worse.”

Researchers at the JCU Turtle Health Research Facility applied ‘good viruses’ to green sea turtles and found that it was successful in eliminating the targeted ‘bad bacteria’ without hampering the non-targeted ‘good bacteria’.

“This shows that phage therapy can be safe and effective enough to manipulate or treat targeted bacteria in green sea turtles,” said Dr Kinobe.

A further complication, previously identified by the JCU Turtle Health Research Facility, is the existence of antibiotic-resistant bacteria in the guts of green sea turtles, which are found in several locations along the Queensland coast.

“Antimicrobial resistance is one of the most critical issues we face, which is why this finding of an alternative to antibiotics is so important,” said co-author Dr Lisa Elliott.

“Bacteriophages and phage therapy have already been suggested as an alternative for antibiotics in humans, but we also need to investigate its scope for treatment in animals.”

The research has been published in the Journal of Environmental Microbiology and opens the door for future applications of phage therapy as an alternative to antibiotics in treating bacterial infections in turtles and other marine animals.