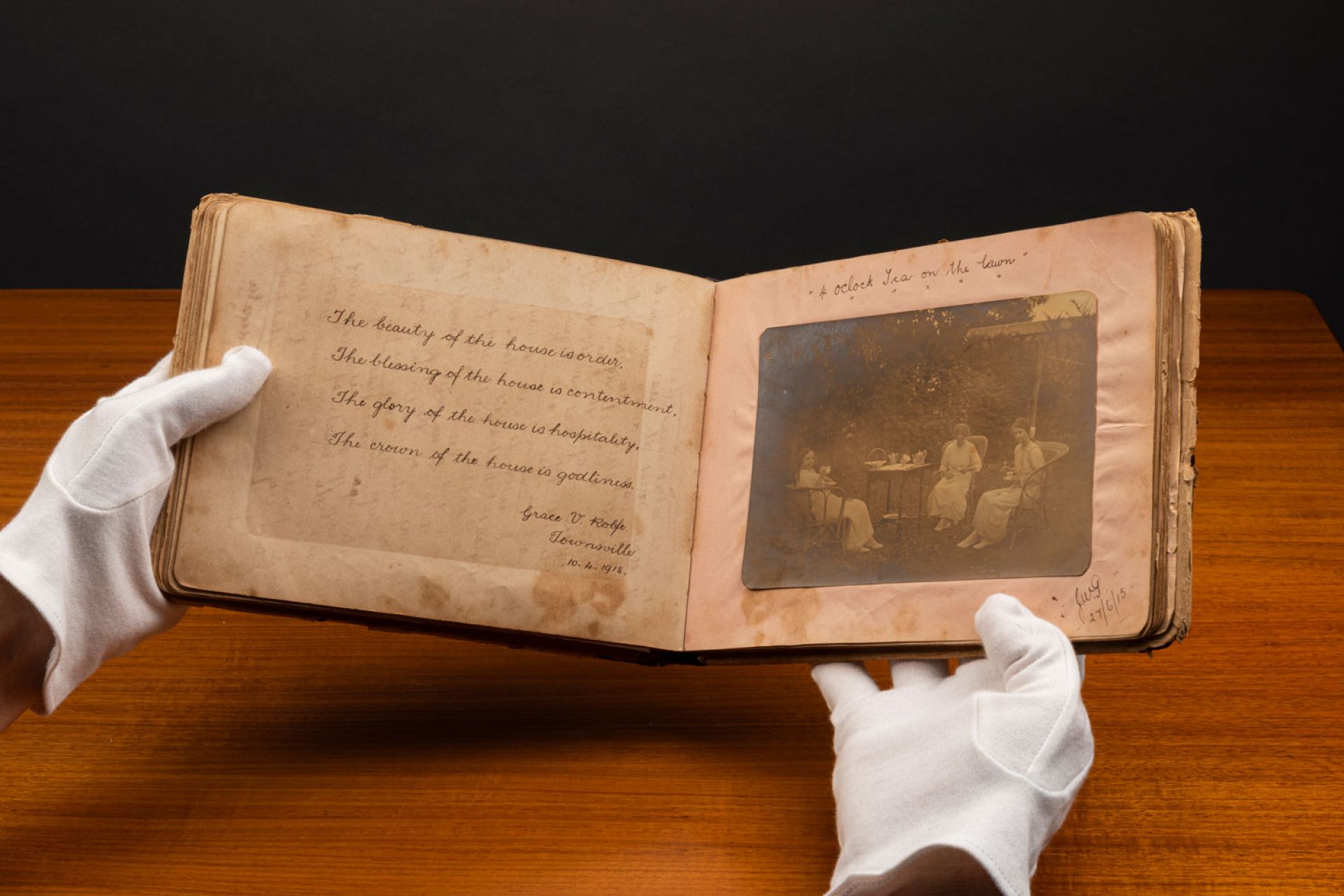 A 107-year old autograph book belonging to a Townsville woman has been declared a “treasure” by the JCU Library for its charming insight into North Queensland society. Photo: Michael Marzik

A 107-year old autograph book belonging to a Townsville woman has been declared a “treasure” by the JCU Library for its charming insight into North Queensland society.

"May she to whom this book belongs
Few troubles have if any
Her hours of gloom may they be few
Her sunny moments many,"
-Lizzie Quinn, Townsville
9.9.14

A 107-year old autograph book belonging to a Townsville woman has been declared a “treasure” by the JCU Library for its charming insight into North Queensland society.

The album is one of JCU Library’s 50 Treasures, which is part of the University’s 50th birthday celebrations. The treasures explore the people, places, and events that have shaped North Queensland through rare and precious artefacts including original manuscripts and artworks from the JCU Library Special Collections.

Many of the treasures are being made available for public viewing for the first time.

The autograph album’s owner was West End resident Rose Popham (b.1886, d.1969), and its writers include her friends, family, and possibly customers at the draper shop where she worked.

As well as witty, poignant, and light-hearted poems, the album is also dotted with illustrations and photographs, providing a snapshot of how we recorded friendships at the turn of the twentieth century.

“It’s a beautiful piece of social history,” said JCU Library Special Collections Manager, Bronwyn McBurnie. “It’s like Facebook from 100 years ago, a place to connect with friends or express ourselves.

“Instead of sharing witty comments and images of daily life on virtual walls, people left written affirmations of mateship including drawings in autograph books.”

The earliest entry is dated 1913, with the majority between 1914 and 1919, thus providing a snapshot of personal life in regional Queensland during World War I.

“Some of the surnames you see in the book are names you’ll see on the street signs of Townsville’s older suburbs in recognition of members of those families who were killed serving in the war,” said Ms McBurnie.

“It’s one of the most delightful, personal items we have in our 50 Treasures exhibition.”

The book was donated to the JCU Special Collections by Lynda Male, Ms Popham’s great-niece.

Rose Popham’s autograph album, along with other treasures, is on display in the Eddie Koiki Mabo Library and the digitised version is available from the NQHeritage@ JCU website: https://nqheritage.jcu.edu.au