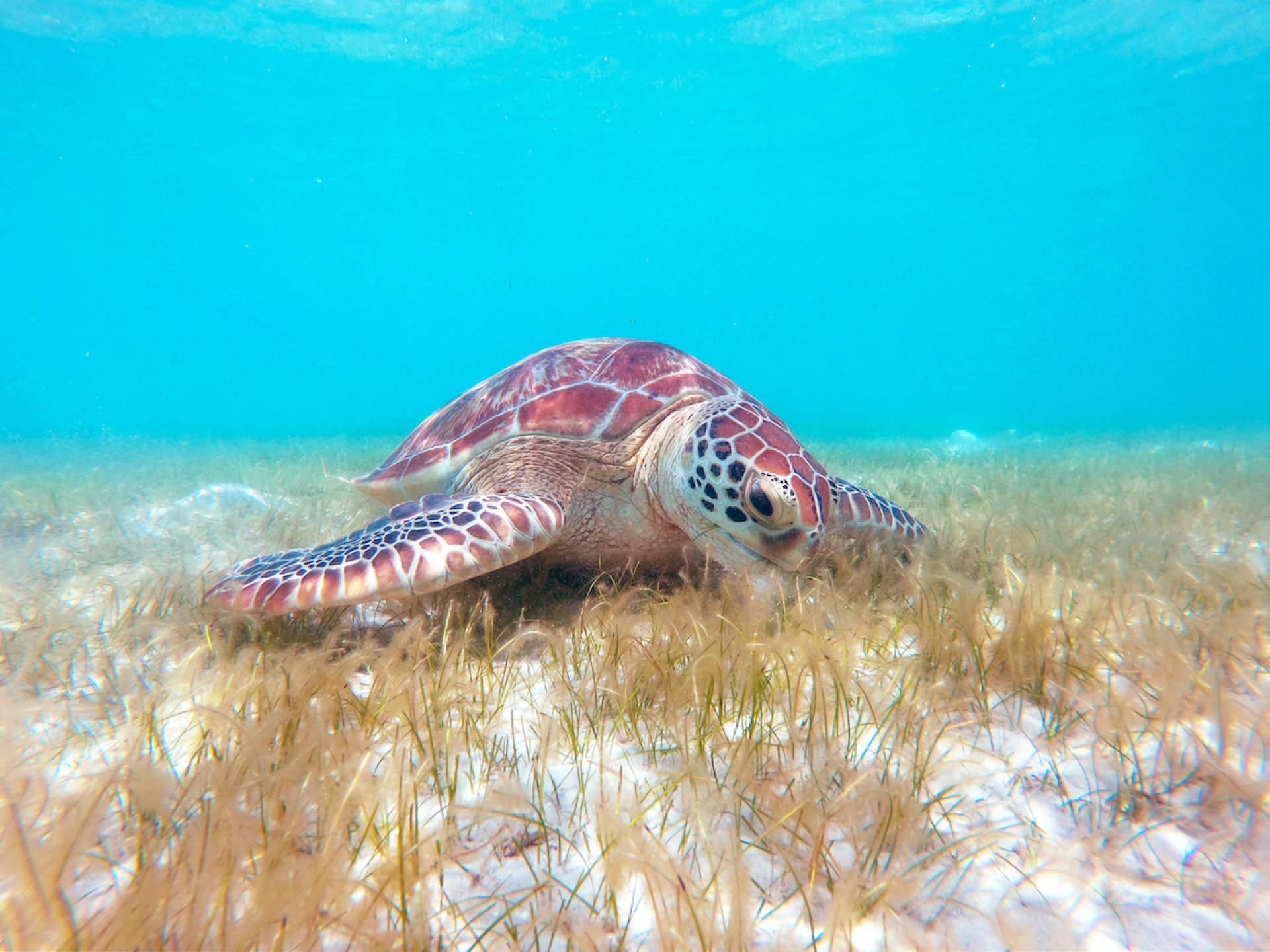 Green sea turtles have been found to aid in seagrass germination. PICTURE: TROPWATER

A recent paper co-authored by Dr Samantha Tol during her PhD candidature with James Cook University found once seeds are passed in the mega-herbivores’ faeces, they decreased the time to germination in one species of seagrass by up to 60 per cent, and increased the chances of germination by up to 400 per cent.

“This research lets us know that these animals play not just an important role in seagrass seed dispersal, but in germination too,” said Dr Tol.

Dr Tol said both animals can assist with the dispersal of seagrass seeds outside of the original foraging meadow, with the subsequent rapid germination allowing for the ongoing replenishment of the seagrass meadow with fresh seedlings and enhanced resilience through the input of new genetic material.

“Increasing the speed and number of seedlings germinating within a meadow and the addition of new genetic material aids in the face of regular hardships experienced daily, such as herbivore consumption, wave energy, erosion and disease outbreak,” she said.

“It can also increase the chance of surviving a large, one-off catastrophic event, such as extreme weather or reduced water quality.”

Dr Tol said the ability for dugongs and green sea turtles to produce accelerated seagrass germination was likely a result of their food ingestion process called “scarification” - the roughing up of the seed coat which has the potential to split it.

“It is also possible that the increase in temperature in the gut for a prolonged time could also be a germination cue, as there is, on average, more than a six degree increase for seven to 14 days during gut passage,” she said.

Dr Tol said the relationship between the animals and seagrass meadows is mutually beneficial as it improves the health and resilience of seagrass and ensures a sustainable food source.

“These two animals may be highly important in connecting seagrass meadows that have low levels of connectivity by wind, wave and currents alone,” she said.

“Therefore, there is a strong possibility if we removed the ecological roles these two animals provide, this would most likely reduce the capacity for seagrass meadows to recover quickly from natural or anthropogenic loss due to a reduction in the health and resilience of seagrass meadows.”

Dr Tol added that the new findings suggest the dugong’s northern hemisphere cousin, the manatee, could have a similar effect on seagrass germination.

“Manatees actually eat a far greater variety of marine and aquatic vegetation than both the sea turtle and dugong, so their potential as long-distance dispersers and germination enhancers could be far greater reaching.

If successful in future grant applications, Dr Tol said she planned to look into other species of seagrass seeds to see what role mega-herbivores played in their ongoing health.

“Additionally, I would like to look into the effect marine mega-herbivores have on the reduction in seed diseases, as an interesting thing we discovered was that many of the seagrass seeds taken directly from the plant succumbed to an unknown pathogen or fungus. This is a known issue for the health of northern hemisphere seagrass species.

“The seeds which passed through a marine mega-herbivore had very low disease rates and this could be another reason behind the greater germination outcomes,” Dr Tol said.