Explorers no longer take to the skies or travel to distant lands to discover the unknown; instead, they look to the depths of the Great Barrier Reef (GBR) Marine Park.

While we can see almost every corner of the globe thanks to Google Earth, beneath the ocean’s surface is an uncharted wonderland of canyons, cliffs and fascinating creatures.

Looking into the past can give us a glimpse of the future.

The GBR’s history can be found far below the ocean’s surface. It is written in a landscape of steep cliffs and grand amphitheatres.

With depths of over 3000 metres, exploring this rarely appreciated landscape requires specialist tools and expertise. The efforts of researchers from around the world are leading to a greater appreciation of this famous but little understood area.

“Because down there it’s cold and dark, the environment hasn’t changed much,” JCU’s Dr Robin Beaman says. “It’s about understanding the landscape and it’s about discovery. We look at all this to try and understand what the future will be. We are heading into an increasing sea-rise scenario and temperatures are warming. How has the Great Barrier Reef responded in the past? Part of our work is about trying to get a sense of that response.”

Sea levels are not stable and have changed dramatically over geological time periods. This history is preserved in the natural structures and layers of sediment found in the deep GBR. Researchers have found evidence of a terrestrial landscape buried under modern marine mud.

However, the resilience of coral reefs over geological time may not be a true indication of their ability to overcome contemporary challenges.

“Over short periods of time, if they’re faced with a whole lot of different risks including sea-level rise, really high warming temperatures and poor water quality, it reduces the resilience,” Robin says.

The deep GBR is the ideal place for modern explorers, however reaching such depths requires expensive specialist equipment, such as sonar and instruments that can withstand high pressure.

Robin was part of a three-week expedition on the world’s biggest and newest research ship, the RV Sonne. He joined researchers from Germany, Australia, the United States, Canada, Japan and The Netherlands on the deep ocean research vessel.

“It’s one thing to map it, but to understand what is living down there and all the connections is a real challenge because of the depths involved,” Robin says. “Just to put a camera down on a sea floor that is 1000 metres deep, you need an expensive camera that is designed for that otherwise it will just implode.”

The advanced technology on the German research vessel provided Robin with a fish’s eye view of the underwater wonderland.

“The sorts of things we were discovering are astounding,” he says. “I’ve been looking at this stuff for a long time, but this still gives me goose bumps.”

The next frontier for researchers is understanding more about the connections between the geological story of the GBR and its marine life. In what can seem like an inhospitable environment, marine life does exist at great depths — just don’t expect to find Nemo down there.

“We filmed at Ribbon Reef down to about 800 metres,” Robin says. “You’re not going to believe what was there. Lots of grey cutthroat eels and sea cucumbers and lots of fish. It’s completely pitch black and around about four degrees Celsius. There are corals down there but they’re cold-water corals, and not like their tropical shallow water cousins. We also found stalked crinoids living down there. These are animals that have continued to live for millions of years and they are growing out in the deep Great Barrier Reef.”

The data collected on research vessels will be used to help manage and protect these areas.

“These very deep areas are not just places to ignore. They are very important because we are now managing them as marine reserves. These are big national parks on the water all around Australia.”
Dr Robin Beaman

Having grown up in North Queensland, Robin is keen to explore more of his “backyard” of the deep GBR. He finds that researchers willing to plunge to great depths usually share a common trait.

“You just have to have a curiosity about what’s down there and accept that the ocean is huge,” he says. “It’s seven-tenths of the world, and it needs people to be able to get into that space. We’re not talking dinghies — we’re talking big ships. We’re now stripping back the ocean and revealing what’s down there. For me, that’s just a wonderful thing to do.” 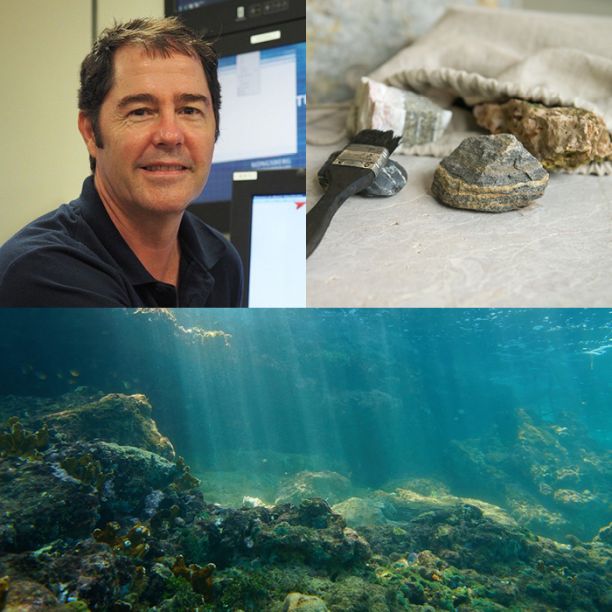 Dr Robin Beaman is a Research Fellow in Geosciences at JCU. His role as a marine geologist is to drive the ocean mapping required to unlock the secrets of Australia’s underwater landscape. His goal is to understand the geological origin of the seafloor and explain the distribution of important seabed habitats and marine life.